Hey, I’m too young for this. Right?

Posted on January 23, 2012 by planetlippstone

Deep breath. OK, this falls under the category of it could be a heck of a lot worse. And it means I’m less than perfect. And getting older. Gee, how’d that happen?

If Paula Deen can dish about her health issues, guess I can too. Still, it’s something I’d hoped was still in the future. Something I associated with Mr. Magoo and Oldsters. … Helloo …

Back to my story about the adorable dog on staff at the optometrist’s. 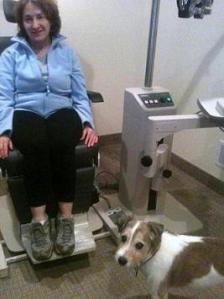 I was there because my sight was starting to get a little foggy, like a Photoshop effect. And my glasses weren’t helping.

With the dog looking on in sympathy, I was told the cataracts that had taken up residence in my eyes were taking over and had to come out.

Though I’d known about the cataracts for years, they were slow-growing and not hindering my sight. So I closed my eyes to the whole issue until I was forced to wake up.

In case you, too, have been in denial — a cataract is a clouding of the eye lens that can blind if left untreated. Contrary to popular belief, it’s not always an age thang.  I’m told they can crop up any time.

The fact that I was once a hopeless sun worshipper who never wore sunglasses might have had something to do with mine.

And being a preemie may have contributed.

I was very premature — as always, in a hurry — to the point I’m lucky I wasn’t born blind. Weighed slightly more than a bunch of bananas.

Lucky enough that my only obstacles were being nearsighted, with an eye that turned in slightly at times.

I’m in good company there: Demi Moore and Kristen Bell had “lazy eye” too.

No, didn’t go to boarding school.

I started wearing glasses as a kid for distance and graduated to contact lenses as an adult.

When I was all growed up, I had the lazy eye fixed. A wonderful surgeon did a great job adjusting the eye muscles.

So given the alternative — not being able to see — I consider myself immensely fortunate.

Anyway, was told cataract lens surgery isn’t supposed to be a big deal. Sure, like every other surgery, there can be complications.

But the operation doesn’t take long; no heavy-duty anesthesia needed. The kaput natural lens is replaced with an artificial one. And sight can be tweaked, making glasses or contacts possibly obsolete. Kewl.

But because my eyes veered from the norm, I needed another pro.

Google led me to Dr. Robert Bailey, head of the cataract unit at Wills Eye Institute, one of Philadelphia’s claims to fame. He turned out to be patient, kind and seemingly unfazed by my circumstances. And calm. As in, Sully Sullenberger calm.

The left eye, my worst, would be first up (If both eyes need fixing, it’s usually done weeks apart). The cloudy lens would be replaced with one specifically for close-up work and reading.

Quick and easy. Great drugs. The only thing I remember beforehand was that a fellow patient was 86 years young, and his case didn’t sound as complicated. Great.

Next day at my check-up, everything was perfect. The fog was gone; the sky, a picture-postcard blue. Thrilled. Felt like The Bionic Woman.

But not even a week later, some blurriness returned. Dejected, I was told the new lens had moved (one of the things that can go wrong) and would have to be adjusted.

Thankfully this procedure wasn’t as complicated as the first. Just enough sedative to take the edge off.

Was told it went well. But I was barely back home (more than an hour away from Philadelphia), when  something I was warned could happen actually did.

Pain  and nausea shot through my head and eye. I was hoping it was the aftereffects of the sedative.

But Dr. Bailey said it he needed to make sure it wasn’t pressure building in the eye. We were to meet him at his Philadelphia office ASAP.

The following Reality Show From Hell is rated TH for Totally Humiliating.

It was getting late, and poor Mitch hadn’t had any dinner. And I was so queasy, I could barely lift my head, let alone eat anything. In the interest of saving time, threw my winter jacket on over my baggy clown pajamas. Now there’s a look for Victoria’s Secret. Off we went on another hour-plus schlep back to Philly.

Given my tidal waves of nausea, I had to tour every public bathroom along the way. We stopped at a fast-food place that shall remain nameless so Mitch could get some sustenance.

I stumbled into the bathroom. Sort of like that dream where you’re naked and relieved it’s only a dream. Except this wasn’t. I was really wearing my ridiculous PJ’s, an eye patch and those big sunglasses over it, in public. And felt too wretched to care.

Back on the road, I was just about in the fetal position. Mitch, who makes it a point to eat healthy, was downing curly fries and lemonade while driving. He offered me a sip. It was vile; like colonoscopy prep.

That did it.  I lost it in a plastic grocery bag I was clutching just in case. Mitch forged ahead, trying to dine to the smooth sounds of retching from the passenger seat. Those curly fries were in danger of becoming hurly fries.

Amazingly, we made it to the office around 10 that night. Sure enough, my eye pressure was off the charts from the surgery — another possible complication come true. Doc calmly explained it can happen, and it’s temporary.

He plied me with drops and pills and waited for them to kick in. We stayed until almost midnight. Next day, I returned. He dismissed it all as a temporary setback and said everything was looking good. I was feeling better.

But two days later, an even-more upset stomach had me in the bathroom all night. Not the eye this time; a nasty stomach bug. Those barnacles I had in the Azores?  Maybe, said family doc.

At any rate, it’s vanished. And my eye is great. Buh-bye computer glasses.

But don’t tell anyone. Don’t want to jinx it.

Holding off on the other eye, which will be programmed for distance. Want to make sure this one stays OK.

So, that was my week. And yours?