Posted on January 18, 2014 by planetlippstone

I’m not a big fan of rental cars — I actually prefer public transportation where possible, but many times a car is the only sane option. Especially if you need to get somewhere late at night.

Here’s how I shop: I never use the big names — which is to say Hertz and Avis. Reason is, even with the coupons I get with my frequent-flyer airline credit card, the price is always through the roof. Not worth the miles.

When I was booking my trip to the urban farm in Miami, I went with a new company, Sixt. They’re a German outfit I’d seen all over Europe — and they’re partnered with lots of airlines —  so I thought I’d see what the deal was. And the deal looked pretty good, actually.

The price was among the lowest of the low. And the reviews were fairly good. I signed up for my usual economy car, expecting the usual box on wheels with no flair. Hey, it wasn’t like I had a job interview with Donald Trump: Who cared?

So there I was, waiting for my ride at the Sixt airport lot in Fort Lauderdale. (For boring reasons you don’t need to know about, I opted for Fort Lauderdale’s airport instead of Miami’s.)

I braced for the usual set of ugly wheels.

Wow. Never drove one and never had a desire to; always thought they looked like sawed-off front ends of regular-sized cars. They were so tiny, I could never see driving one of them farther than the supermarket, let alone the South Florida Speedway otherwise known as Interstate 95.

I nicely voiced my concerns, aware that the Sixt guys didn’t have all day to deal with my phobias.

Next thing I knew, a foxy, silver Mini Cooper convertible was at my feet.

I just smiled, afraid if I said what I was thinking — That’s an economy car? they’d realize their mistake and it would — poof — turn into a lime-green Chevy Cruze, which is what I thought I was getting in the first place.

So off I blissfully went — after they took more time to help me — a Mini virgin — fiddle with all the controls.

As it turns out, my right side view mirror was adjusted to useless; and even with the air con, the windows kept fogging up, no doubt from the Miami humidity and my heavy breathing.

But I was already on I-95; it was late; and I was more terrified to stop somewhere and fix the mirror than to plow along and hope for the best.

Mini and Me down on the farm in Miami.

When I returned the car, I was bracing for the usual penalty for not refilling the gas tank. Since I’d used so little, I got a pass. What a nice surprise.

But are you ready for this? There was a food truck in the Sixt lot practically on top of the airport shuttle bus stop.

I applauded the business chops of whoever had the idea to position a food truck in such a great location. Full of crazed tourists in a rush. How could they resist?

The menu looked surprisingly interesting, too. After cavorting with all the darling pigs and the like on the farm, I should have had the “Mac N Cheese Ball” (at the bottom) on principal.

Instead, I had “The Daily” with chicken (yes, shame!) but did ask them to hold the bacon. I, ahem, don’t think they heard me. 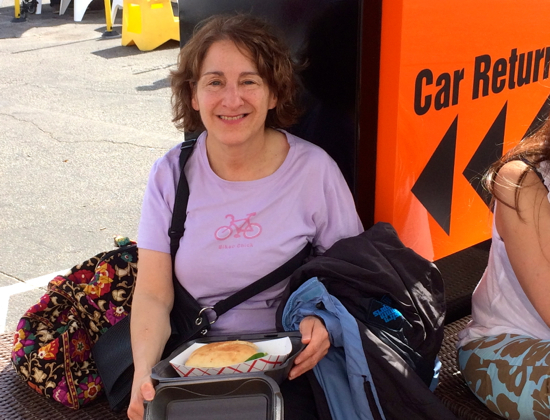 It was so good and convenient, since I had a plane to catch  …

Here’s the kicker. This wasn’t an outside food truck that pushed its way onto the Sixt lot. It was a business hired by Sixt itself to provide free grub and bottled water to customers.

So a big shout-out to Sixt. Whether I just got lucky, or they’re that accommodating everywhere, remains to be seen. I’ll be back to find out!