Let’s Paws: Happy to be a Blind Dog’s Seeing-Eye Dog

Posted on December 23, 2015 by planetlippstone

My latest trip was to take what might be my last journey with one of my favorite beings — my blind nephew Chaos, a 12-year-old Labrador Retriever.

I volunteered to dog-sit, which meant flying down to my sister’s in Charlotte, NC. I hadn’t seen him in years, certainly not since being told he was blind from diabetes and that he had shrunk to about half his size.

Chaos and mom, my sister.

That was hard to grasp because this is how I remember him, a lightning bolt when it came to playing catch, which he would do endlessly. We used to call him the outlaw Jesse James because he always found a way to crawl under the backyard fence to freedom. Luckily he was always found before he wandered into trouble. 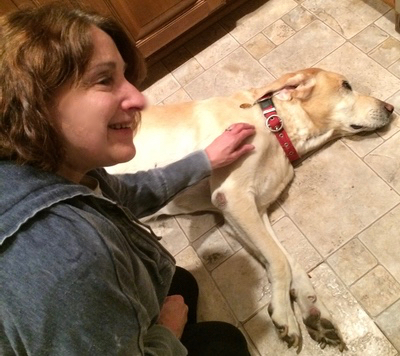 I was pleasantly surprised to see he was still the same pup.  Still loved to revel in belly rubs and give gooey kisses.

And cuddling. We had a few heart to hearts. Chaos was a last tie to my late brother-in-law who’d actually named him more than a decade ago because he had a thing for chowing down on eyeglasses, TV remotes and Benadryl. (Marley had nothing on him.)

He’d seen us all, humans and other dogs that had once been in the picture, through a lot. 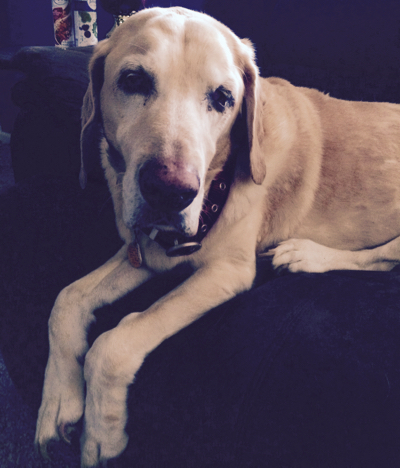 I held his head in my hands and reminded him of this. That he was Oscar and Daisy’s boy (the labs who were his parents), even though he looked like their grandparent at this point, his eyes clouded over. He nuzzled me and I’m sure he knew what I was talking about when I told him how much we all loved him.

No more playing catch. But he still loved to go out and sniff. His nose and ears became a super-sensitive GPS. And wouldn’t you know it, I’m told, he still managed to suss out gaps in the fence.

It was amazing to watch that GPS in action. But he still needed a bit of guidance. I was happy to accommodate him. That’s him and his shadow — me. 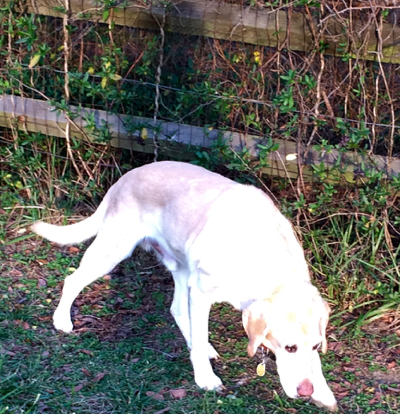 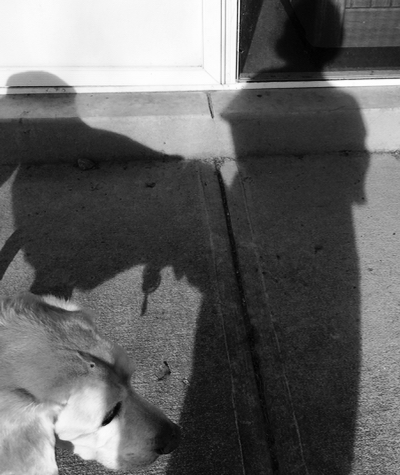 This entry was posted in Let's Paws: I break for critters and tagged blind dogs, dog lovers, family, Labradors, Pets. Bookmark the permalink.