Posted on November 22, 2015 by planetlippstone

I really hate to see Brussels, Belgium, on lockdown, with the city bracing for a possible terror attack like the one that decimated Paris.

When I went there last Easter in search of extraordinary chocolate, I also got a good taste of the place. It was so cosmopolitan, I couldn’t understand why it had a rep as a European wallflower as opposed to glamorous Paris. Its French and Dutch roots were just as interesting. Here are a few snapshots.

First off, it’s no secret that Brussels has seen its fair share of violence. I did stumble upon the Jewish museum that had been a terrorist target last year, which I wasn’t actively looking for nor avoiding. But there it was. A frightening and upsetting sight.

But I found the city and its people lovely.

The Airbnb I stayed at was dreamy; one of the nicest I’d ever been in. Like a palace. It was in Ixtelles, centrally located, which means it was within walking distance of some of the best and worst neighborhoods. I walked everywhere or took public transportation, kept a low profile, and never had a problem.

My host was on his way to a nearby flea market, and he was nice enough to walk me there. It was like wandering through a gigantic attic with, I have to say, a lot of junk. Here’s more about it.

I came away with some earrings that I was told were from an estate, though I would have preferred these darling dogs. No fleas on them, as far as I could tell.

Locals attempted to teach me the fine art of eating Brussels mussels. With frites — fries — on the side.

There were frites joints everywhere, including this one in the neighborhood. The advertised fare seemed heavy. I was more content just to gaze at the beautiful building.

Another place for potatoes was more my speed. Baked and mashed potatoes in all manner of combinations. The place’s grand opening was that night. 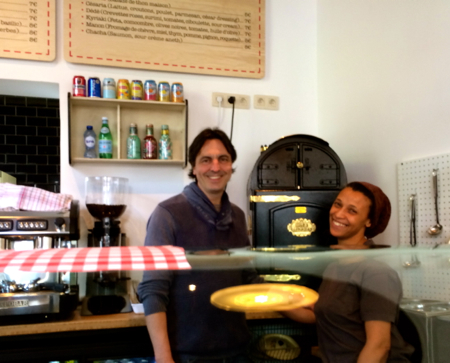 The owners served me up a preview, and it was lovely getting to know them. Just checked in with them; nice to know they’re still in business. 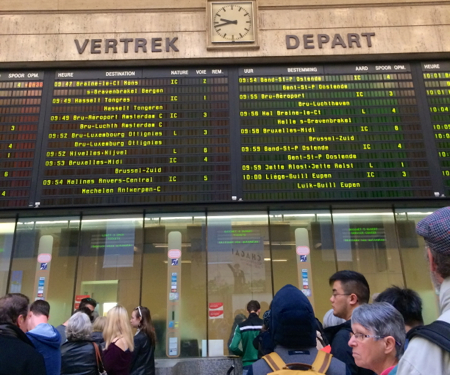 Though the former was made famous by that movie starring Colin Farrell, I was attracted by the latter because it sounded less touristy. 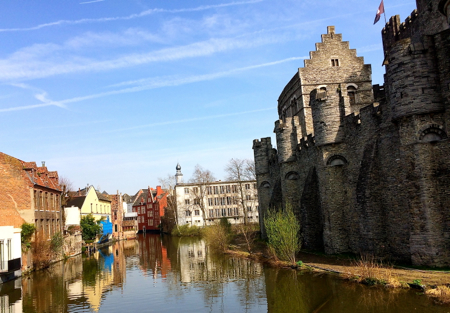 Not quite. Ghent was pretty enough, but still crowded in early spring. I hid out in a castle in the middle of town.

I could hide out no longer; I emerged to eat awful, overpriced Belgian waffles. Everything in the tourist section looked awful and overpriced; the local alternative in another part of town looked to be mostly burgers. So there wasn’t much to choose from. 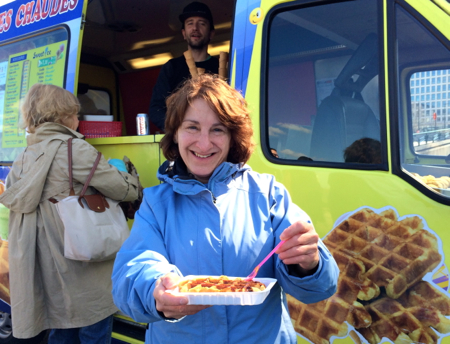 As it turns out, these were the best waffles I had in Belgium: from a truck near that Brussels flea market. They still weren’t that hot.

But the city is, and it’s well-worth a visit.