MLB: Go for the history, stay for the ballgame

Posted on September 27, 2015 by planetlippstone

Nice to see the New York Mets clinch the NL East title. As a longtime (as in the days of a certain guy named McGraw, and I don’t mean Tim; and even way before that), Amazins fan, we never take that for granted.

Confess I haven’t kept up with the roster for a long time. That’s why it was nice to go to a home game a couple weeks back and tap into my roots.

I hadn’t been since the old Shea Stadium. Have to say the new CitiField was a big nothing. I’ve had better vending machine grub. Outwardly, it could have been anywhere. There was no sense of history like you’d find at Fenway, Camden Yards and Wrigley Field. Too bad new stadiums can’t be built to look like old ones, with less-intrusive corporate logos.

But a tip of the baseball cap to a few attempts to capture the past. 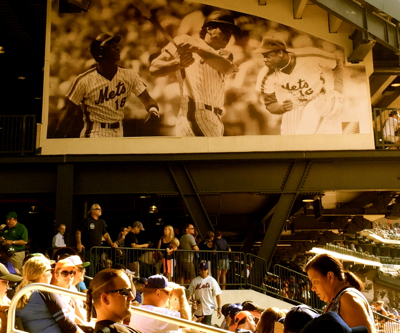 Some vintage photos thrown around.

A rotunda honoring the late, great Jackie Robinson. And a mini museum I’m sorry I didn’t have time to see.

But I did have time to grab a T-shirt picked for style, not sentiment. Sported the name Granderson. Didn’t know who he was until I bought the shirt.