Glad that Amtrak service is back on track between Philadelphia and New York. As it’s always been for me.

I’ve been riding that route since before the guy who was at the controls during that deadly derailment in Philadelphia was born. It was how I juggled two TV news writing jobs in Philadelphia and Manhattan. 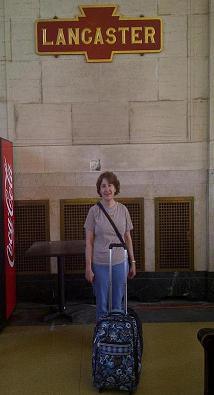 Now it’s my gateway to NYC and the rest of the world.

My station in Lancaster, Pa., has been undergoing some overdue 21st Century refurbishing. But a quirk from the last century remains. An impromptu book rack offering a freebie to take along for the ride. How quaint can you get?

Over the years, I’ve gotten used to the view from the train, such as it is. Mostly skeletons of abandoned stores and factories, and some still belching air with a slight sting to it. With little bursts of civilization. A faint glimpse of my alma mater, Temple University, in the Philadelphia distance. Folks and dogs in back yards. Or shopping at Lowe’s.

I took the same kind of trip from San Diego to L.A. Except for the tracks meandering thrillingly close to the Pacific Ocean, like some amusement park ride, it was essentially the same gritty view.

After all this time, I’ve never felt in jeopardy, because there was never any reason to. Never experienced anything more than some downed wires during a thunderstorm.

It certainly was unnerving to read that better safety precautions might have prevented the Philadelphia tragedy, and the engineer professed to not knowing what happened.

But that’s not going to stop me or the thousands of others who rely on Amtrak every day.

This entry was posted in Uncategorized and tagged Amtrak derailment, San Diego to Los Angeles train. Bookmark the permalink.