Let’s Paws: Away, and missing that special pet?

Posted on August 26, 2014 by planetlippstone 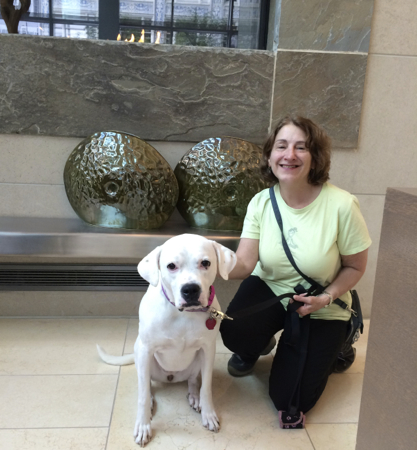 Meet Edie, the mascot at the Fairmont hotel in Pittsburgh. Or, to use her formal title, “Canine Ambassador.”

Look closely at this boxer/lab mix and you’ll see her tail is bent. Apparently this rescue pooch was hit by a car as a pup and that’s the way it healed. Fortunately, so did she.

Edie — named for Edie Sedgwick, close gal pal of one of Pittsburgh’s most famous natives, Andy Warhol  — began her schooling as a service dog. She was a little too gregarious and not serious enough for the gig, so she flunked her way into the hospitality industry.

A much better fit for this laid-back, human-loving canine. She’ll take you for a stroll around downtown Pittsburgh, or is happy to hang out when you feel like taking a meeting break.

Edie is a reminder that the Fairmont is a pet-friendly hotel.  She also has her own email and Facebook page.

Of course the Fairmont’s not the only hotel chain to do this. (Here’s another I found in Florida.) Lots of places have mascots. And here’s even more info.