Behind the Scenes: HBO’s ‘Treme’

Posted on February 3, 2014 by planetlippstone

The complete HBO series Treme’  is now out on Blu-ray if you’re interested.

Maybe you’re not a fan of this show about New Orleans, and sadly enough, you really wanted to be. Because you, like so many others, were so hooked on its predecessor, The Wire. And thought the creator of both, David Simon, was an absolute genius. So you had great expectations.

I knew more than a few people like that. So I gave it a shot. But not for long.

Don’t get me wrong. I liked the idea of zeroing in at the human side of Hurricane Katrina and really getting to know some of the city.

The story begins three months after Katrina overpowered the city’s inadequate levees, resulting in killer floods that tried to strangle a place with a distinct personality — one that loved good music, good food and good times.

Treme’ focuses on a cross-section of residents, chronicling their struggle to get on their feet. The painstaking recovery comes from the medicine that’s been there all along: their spirit and deep ties to their crazy-quilt (French, Black, Creole, you name it) culture — rooted in the music.

Much of the series takes place in the Treme’ neighborhood of New Orleans. It’s basically across the street and a world away from the city’s celebrated French Quarter.

While the French Quarter has always been the city’s happy face, Treme’ is a large part of its soul.

It’s said to be America’s oldest African American neighborhood, where civil rights, jazz, and a cultural phenomenon known as the Mardi Gras Indians took root. So it’s only natural that Simon set his series here, to highlight the determination to face the future by tapping into its rich past.

Even with all that music, the series failed to strike a chord with some viewers, including me. I felt there was too much emphasis on the musical numbers to the point that they drowned out the rest of the story. Shame, because the acting and production were top-notch.

Whether you liked the show or have never heard of it, Treme’ is a neighborhood worth your time.

Because New Orleans is fairly compact, it’s easy to walk to, which I did, using my iPhone as a guide. I wouldn’t advise this at night, especially if you don’t know where you’re going. Crime is a problem in all of New Orleans, as it is in many other cities.

There are day tours that deal with Treme’ history and, of course, some of the show locations. I did some of each.

The neighborhood’s full name is Faubourg (neighborhood in French) Treme’. It was named for a hat maker and real estate developer who came to New Orleans from France in the 1700s.

St. Augustine Catholic Church, a frequent neighborhood backdrop in the show, is said to be the nation’s oldest African-American parish. It was founded by free blacks, who bought pews for slaves so they could also worship.

Onsite  is the Tomb of the Unknown Slave, which honors slaves buried in unmarked graves in Treme’ and across the U.S.

Bayona, a few blocks away in the French Quarter, is owned by chef Susan Spicer, said to be the inspiration for the show’s chef, Janette Desautel (Kim Dickens).

Music is the lifeblood of New Orleans, and Treme’ in particular. Above are statues in Louis Armstrong Park, a tribute to the jazz legend. 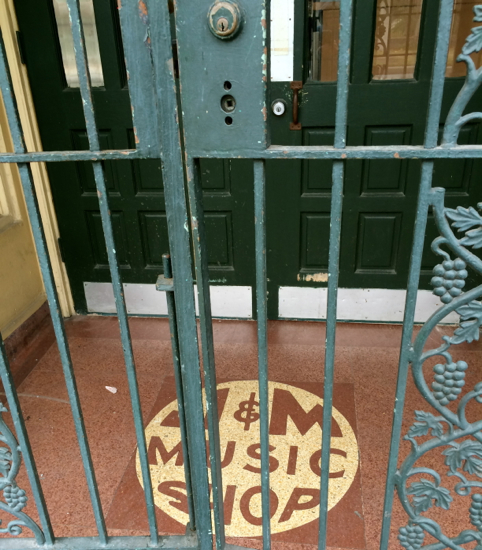 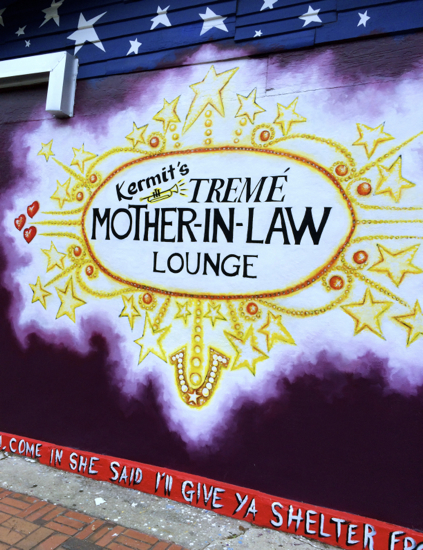 The Mother-In-Law Lounge was originally owned by late singer Ernie K-Doe, of the smash ’60s hit “Mother In Law.” It’s been taken over by jazz trumpeter and Treme’ star Kermit Ruffins.

Some scenes from a neighborhood working to make things better: 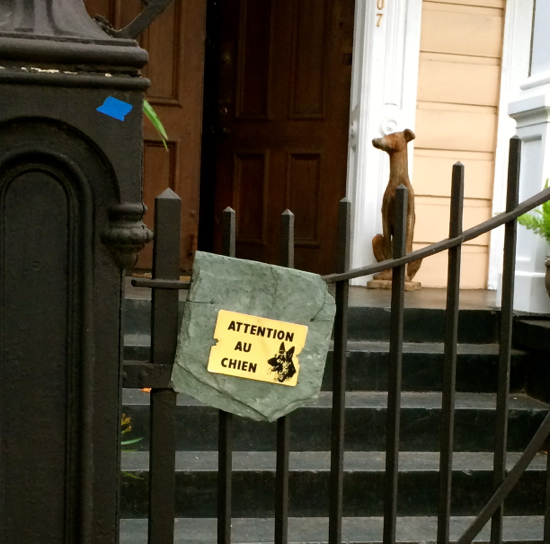 On to Li’l Dizzy’s Cafe, a favorite meeting spot in the TV series. Tucking into a hefty plate of crabmeat omelette, a mountain o’ grits and a biscuit. 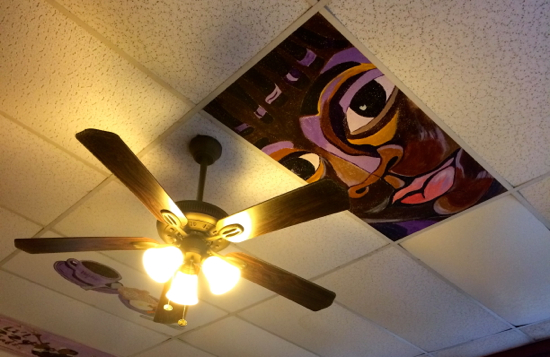 But you couldn’t beat this ambiance. Not exactly the same.

Footnotes: Wendell Pierce, who played trombonist Antoine Batiste, is from New Orleans and has started a chain of grocery and convenience stores there.

And John Goodman’s character,  Creighton Bernette, is based in part on late blogger Ashley Morris, who gained local fame with his passionate posts about Katrina’s devastation.