Let’s Paws: Thankful for an angel on his last wings

Posted on December 2, 2013 by planetlippstone

Thankful because I spent Thanksgiving with someone who wasn’t supposed to make it that long — my sister’s Labrador, Skipper. Actually, he was days away from death as a youngster 9 years ago when she rescued him.

Dashing in the snow!

I first wrote about Skipper a while back. He was doing as well as can be expected of a middle-aged dog born with such damaged nerves, he never walked right. And when he lay down, he had to lay flat on his stomach, like he was doing a belly flop. Hence his nickname, Pancake.

Skipper, left, and brother Chaos, after romp at dog park.

But early physical therapy went a very long way. He did considerably fine, fetching a ball just like his older brother Chaos, who’s in fine shape. And usually running off with it before Chaos could get a pawhold.

Skipper also had an affinity for unusual snacks: blankets, numerous rubber balls and anything else he could pack into that giant maw of his.

He was so good-natured. It took everything he had to lift that gargantuan bod — over 100 pounds of a real-life stuffed toy. (My sister tenaciously battled to keep his weight down with her version of Weight Watchers for Dogs. Healthy, pitiful servings. )

Skip and my nephew in younger days.

Then came word a few months ago that he was going to have to be put down sooner than later because his condition had caught up to him in his old age. He could no longer walk without heavy-duty assistance. He had to drag himself or be dragged to go outside to do his business. His paw was bloody from all the dragging. The whimper had escalated into howls of pain.

He won’t be here at Thanksgiving, my sister warned. One consolation: Her vet, who had fallen in love with “Gippy,” agreed to come to the house to send Skipper on his way to the Rainbow Bridge when the time came.

Every week, I would expect to hear he was gone.

But she kept in daily contact with the vet. An amputation, she was told, would be too taxing on his creaking, old body. The vet found a combination of pain pills and antibiotics to keep his paws clean that seemed to work.

The above is all in past tense because I kept bracing for the worst. But this is what greeted me Thanksgiving Day:

If I hadn’t known any better … There he was, still very much in the game. 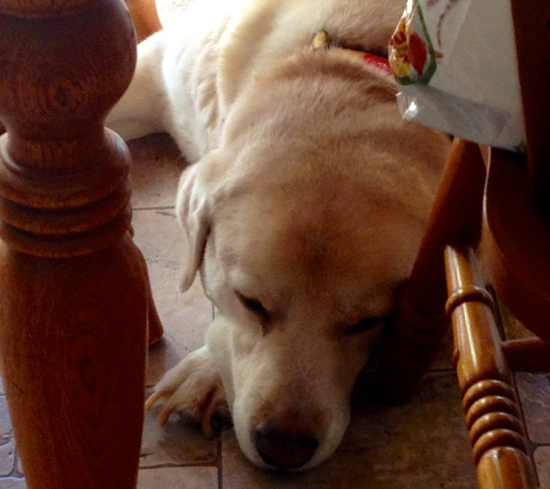 Hangin’ under the kitchen table, as always, while my sis put the finishing touches on an awesome dinner.

He’s said to be stable for now. But I saw him on some good days. I didn’t see the not-so-good ones, manageable for now, but heartbreaking.

One day fairly soon, the vet will have to make that house call.

So grateful to have shared some extra-special moments with him this Thanksgiving. Skipper, there will never be another creature like you: pure love.

This entry was posted in Let's Paws: I break for critters and tagged dog lovers, dogs, Labrador retrievers, Pets, putting dogs down, Thanksgiving. Bookmark the permalink.