What you’ve just gotta do in NYC

Posted on October 13, 2013 by planetlippstone

When people ask me what they absolutely must do when visiting NYC, I don’t say hang out at Zabar’s or have deli or Yonah Schimmel’s knishes or visit the Lower East Side Tenement Museum, the Carl Schurz dog park or mainline Magnolia Bakery cupcakes.

But those would be my next suggestions because they’re all in my Top 10.

Amazingly out of character for me, exercise actually trumps food when it comes to my very favorite thing to do in New York: Take a walk across the Brooklyn Bridge.

Certainly, it’s far from the only way to cross the East River between Manhattan and Brooklyn. And definitely far from the easiest.

Why would I want to do this schlep in all kinds of weather and add extra time to my commute when I could just hop in a subway or taxi and be done with it? Because, as we say here at Planet Lippstone, it’s the journey. Plus — it’s one of the best places in the world to get those endorphins.

Just to avoid any confusion, that’s not me. Sex and the City/HBO

I’d always had a thing for the bridge, waaay before Girls and Sex and The City.

It stems back to my grandparents who lived in Brooklyn. The bridge dates back to 1883, just before their time.

To this day, when I see the bridge’s arches, I see my Grandpa Milton and Nanny Brown with their kind smiles, reminding me not to forget my Brooklyn roots.

So when I lived in Brooklyn, I’d do the trek at least once a week. Often in reverse from midtown Manhattan, on my way home from my TV news job.

No better way to shake off all that deadline pressure. Plus, it gave me the chance to learn about great neighborhoods like SoHo and Tribeca (before they were tres trendy), Chinatown and the Lower East Side.

Then, the bridge. What was about it that kept me going back for more?

The fact that you could glide over the river at your own pace, high above the traffic gridlock, blaring horns and simmering road rage.

Plus, a view you just can’t get from the depths of the subway.

It’s so romantic. Even if you’re by yourself, you’re locking eyes the whole time with one of the hunkiest presences around: the Manhattan skyline.

I had a chance to rekindle the flame the other week — on a hot, late summer day, as it turns out. But this time I was considerably older and lugging an overnight bag and my computer.

Happy to be there once again. But man, was it hot.

But the view was just as I remembered: spectacular. That structure to the right that looks like a giant needle is one of the first new World Trade Center office buildings.

More of the East River separating Manhattan and Brooklyn … 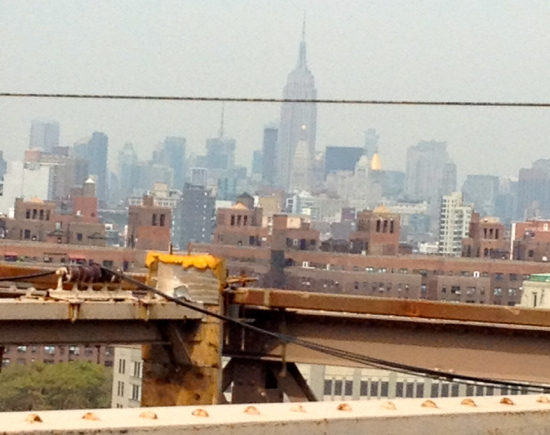 And a closer shot of the Empire State Building.

An old-fashioned bridge lamppost set against the ever-changing skyline.

Just a great place to hang out …

Here’s a useful map and more information on how to get to and from the bridge from either side.