Posted on September 7, 2013 by planetlippstone 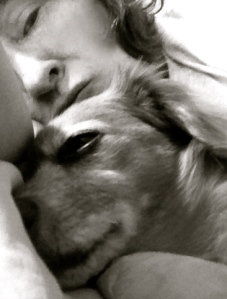 You know, I’d just love to check some of them out, but the guest I’d be bringing isn’t pet friendly. She’s just plain jealous. Of anything that collides with her bubble. Especially other animals.

As you might know if you follow this space, our dachshund Ginger only has eyes for hoomins, and not just anybody. She’ll bark at house guests nonstop for a good long time.

Then she’ll start sniffing, and the next thing you know, she’s curled up peacefully beside said stranger like nothing ever happened.

Most of the time.

There’s a reason she’s been referred to as, um, “Ginger Bin Laden” by a good friend.

She’s been — ahem — known to try to take a nip out of an ankle of a select few, like repair folks and others buzzing in and out who don’t have time to go through her vetting process. We make sure she’s not around when they show up. 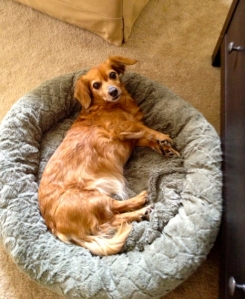 At the Hotel Ginger, she’s loving her new bed from HomeGoods. General decor by IKEA.

Yeah. But hey, she was found abandoned on an interstate 17 years ago (since she was a stray, we’re not sure of her exact age, but it’s waay up there).

Whoever had her first did a great job of housebreaking her. We’ll never know what else went on — and why she takes so sweetly to some and not others.

She’s smart as a whippet’s tail, and still trainable, even in her very old age. She’s just stubborn and incredibly feisty for such an ancient being.

Again, this is why we can’t make the pet-friendly hotel scene.

(Though when we’ve been away, she and her babysitter have been frequenting a local burger joint and chowing down on cheeseburgers! So she’d most likely adore hotel room service. What the hay; at her age, does it really matter?)

Anyway, if you have a pet that’s not such a pain in the tush, you might want to check these out.