The only thing this Nu Yawka knew about Country was when we moved to Nu Joisey, all our Nu Yawk relatives clucked in pity at our moving to the country. This was practically covered wagon days, when Joisey was really considered Country. And in many Manhattan minds, it still is.

And what do I know from Country kulcha? Tim McGraw (though as a Mets’ fan I knew more about his late dad Tug) and Stuckey’s pecan logs. And oh yeah, visiting a very ex-boyfriend’s granny who lived in a tin-roof house in the Blue Ridge Mountains of Virginia. I think she may have killed the chicken we had for dinner, but didn’t ask because I really didn’t want to know.

That’s about it for this Jewish gal from the big city. 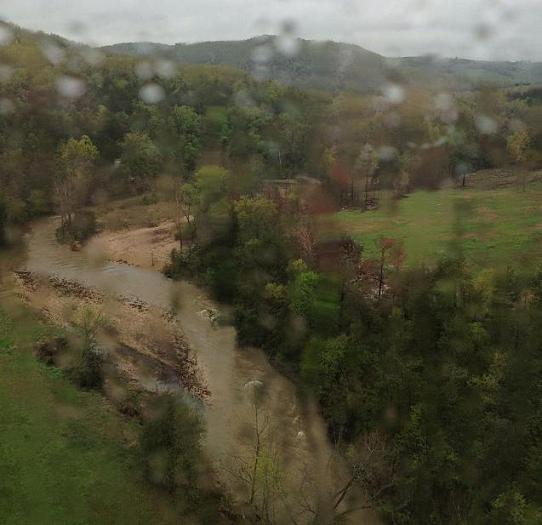 So what was said Jewish gal who gets hives from theme parks doing in Branson, Missouri? That Bible Belt Las Vegas in the Ozarks –a backdrop for the Beverly Hillbillies?

Branson is everything you may have heard: As country as Dolly Parton – who has a dinner theater there. Live Music Show Capital of the World! More theater seats than Broadway! Religious theatrical extravaganzas, both Old and New Testaments! Gospel aplenty!

Trying to keep up with a fast-moving camel behind the scenes at a Christian theater company.

Let’s be honest: It’s not for everyone and doesn’t try to be. Its big draw is its W (for wholesome) rating and Christian vibe. But it’s also a campy international showcase, plunked down in the middle of some nice natural scenery.

I had a good time for the same reasons I secretly adore Cracker Barrel (one of my road-trip weaknesses; chicken and dumplings and Valomilks, oh my!) and singing in my car.

Branson’s like Cracker Barrel where you can stay over. Heaping spoonfuls of camp. Like padding around in pajamas with feet everywhere as an adult – and getting away with it.

Here’s some of its charms. 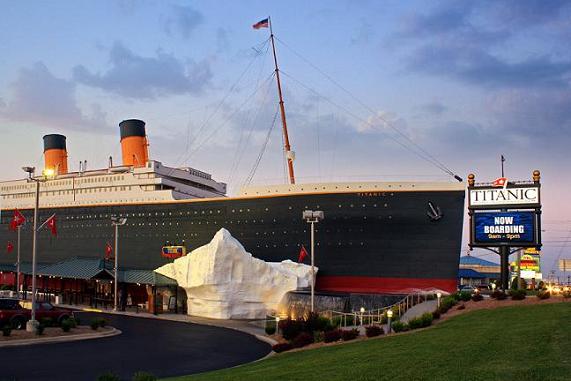 When I first saw a copy of the doomed ship parked along a Branson highway in landlocked Missouri, ready to “board,” I thought, uh, nope.

But since I’m such a sucker for the Cameron movie (I have the soundtrack on my iPhone), I got into it.

There was the replica of the grand staircase. And a pretty impressive collection of some of the real stuff from the ship and the wreck. Including kosher utensils used by the Astors for some of their last suppers.

Then there was the rough touch of a iceberg; trying to walk the deck as the ship was sinking; and the shock of the freezing ocean.

Not to mention two real Cavalier King Charles Spaniel dogs (the same breed as “Elizabeth Taylor” on Sex and the City) – a tribute to the dogs on the voyage. Unlike those dogs, these lucky girls were plied with nonstop treats and belly rubs.

When I boarded, I was given a boarding pass for a supposed actual passenger: a woman traveling in Third Class. So I couldn’t be Molly Brown?

I found out my passenger didn’t make it. I consoled myself with some vintage-looking earrings at the gift shop that sort of looked like what Kate Winslet would have worn in the movie. If they had been real gold. And  resisted the urge to go for the bling that capitalized on the ficticious Heart of the Sea pendant from the movie. A bit much.

The hills are alive with all kinds of fare. Real celebrities like Tim McGraw, Jerry Springer and Charley Pride show up on tour. Continuous cover acts are dedicated to the Four Seasons, Abba and everyone in between.

Among the firsts for this Broadway maven: a showboat on a lake. The entertainment was a comedian and magician who apparently did time at Hollywood’s famed Magic Castle and was now in Wal-Mart country, trying out jokes about Wal-Mart shoppers. Well, I thought he was funny.

And a violinist who can sing and play a mean violin up in the air, no less. This America’s Got Talent performer is a Julliard grad and Army vet to boot. Show-off …

Also tried my first country music show on for size. Have to say I was totally taken with the family act known as the Presleys (no relation to Elvis), who’ve been at it since the 1960s.

I was charmed by the different generations, the tunes (really got into Stand By Your Man, the only song I knew — natch ) the homespun humor (updated with a Twitter reference), and the revelation that the cute, low-key drummer was married to Branson’s mayor.

A limestone cave that goes on forever was a welcome respite from the above-ground frenzy.

On a raw, rainy spring day, I white-knuckled it on the handrails as I navigated hundreds of slick steps carved from the limestone, ducking menacing fingers of rock jutting out everywhere. A nice high.

I confess I didn’t try out what’s billed as one of the world’s scariest roller coasters because I’ve had an aversion to amusement parks since growing up at the Jersey Shore. Reason: I like being right-side up. Maybe you don’t. Got for it.

Good food, and plenty of it

Seriously, one of the best meals I’ve ever had was at the restaurant school at the College of the Ozarks, where the students work in the dairy and mill for their education. The food and the presentation were almost too beautiful to consume. Almost.

In addition to the usual outlets is a faux Ozarks village. Some of the stuff is really nice, like glassware, jewelry and pottery made by hand. Also plenty of chachkas. And fudge. Lots of fudge.

I was quite happy to find yet another Life is Good T-shirt, this one with a stick figure doing yoga and the words Total Poser on it. I needed the reminder to get back into it.

Got this trendy T in Branson. Whodda thunk?