Many reasons to visit Iceland — even in winter

Posted on January 25, 2013 by planetlippstone

If you’re pondering where to vacation this year, here’s another destination for your list.

Seriously. And I say that after having been there in the dead of winter.

As 30 Rock’s Liz Lemon might ask, Why would I want to go to there? Because I traditionally get away around Christmas and Hanukkah. Besides, what better place to go to than (almost) the North Pole during Christmas?

And  I always try to go to very hot or cool places in the off-season to save dough.

I was curious about this piece of Europe parked in the middle of the Atlantic Ocean almost on top of the world at the Arctic Circle. Yet winter temperatures were supposed to be warmer than my home in Pennsylvania, due to that weather phenom known as the Gulf Stream.

Iceland, I’d read, was settled mostly by Nordic Vikings a long time ago. And they still speak Icelandic, which is basically Viking. Really. (Along with English.)

It’s got a bunch of natural wonders all in one country. Think Hawaii meets Africa meets New Zealand and New England.

Active volcanoes — like that one that created a ferocious cloud that really messed with  transatlantic air travel a few years back.

Plus, waterfalls, glaciers, geysers, endless rugged coastline. A national park that’s on the prestigious list of UNESCO World  Heritage sites. And the Northern Lights — that colorful collision of sun and earth particles.

And natural hot springs spawned from all that volcanic activity, where you can swim all year long. Plus some place called The Blue Lagoon. Since the only Blue Lagoon I  knew about was the movie, I was even more intrigued.

Other claims to fame: Bjork. Of Monsters and Men. And that bank crisis.

That was enough for us to be on our way from New York to Reykjavik — the most-northern capital in the world — for the quick few days between Christmas and New Year’s.

It was just plain weird shopping for a bathing suit to wear in Iceland in the winter. I couldn’t bear the agony of trying one on, so got some expendable (and expandable) stretch pants and T-shirt at Marshalls.

Icelandair, the country’s national airline, is the only way to get there from the U.S. at that time of year.  If you have the time and money,  the airline offers Iceland as a stopover on the way to Europe at no extra charge. We didn’t.

I had a beef with the flight, because there was no beef — or anything in the way of a real meal.  This  on an international flight that took almost six hours, and cost almost a grand, even in the off-season. The hamburgers and hot dogs for sale just didn’t cut it.

I was, however, fascinated by an inflight-shopping offering: a salmon-skin flask. Who uses flasks, outside of vintage James Bond movies?  And I’d never seen salmon skin on anything but a plate.

At least Iceland has an airline. For a a country about the size of Kentucky, with less people than Wichita, Kansas, that’s pretty impressive.

If you’re renting a car at the airport, make sure you get the airport right. Reykjavik is actually big enough to have two. Because I didn’t realize this, we had to do the rental all over again.

This after flying all night. And yeah, it was cold. Gulf Stream, my frozen keister. That Arctic wind cut like a laser. 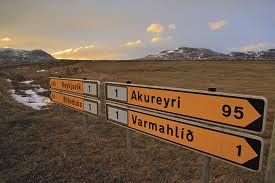 Driving from the airport to the city couldn’t have been easier. The roads were clear; we had a four-wheel-drive automatic; and they drive on the same side of the road we do.

But the road signs were in Icelandic, of course. Not intuitive to my English brain.  All those consonants. We got lost trying to get to our rented apartment.

Once again, I rented the digs through Airbnb, which I’ve now used in three countries. Here’s where we  stayed. 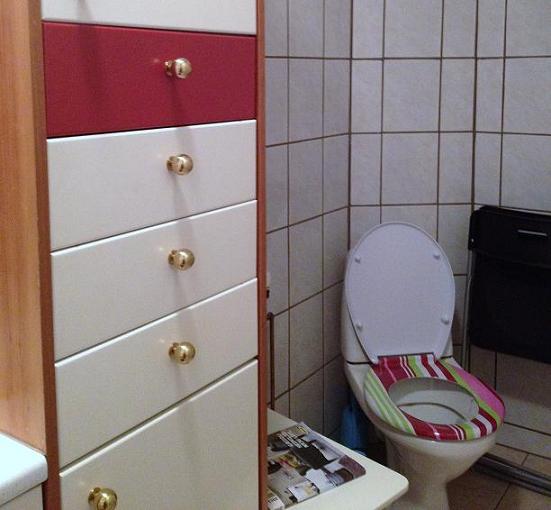 One big IKEA showroom, which was fine with me. Great location for less than $100 a night in a very expensive city. 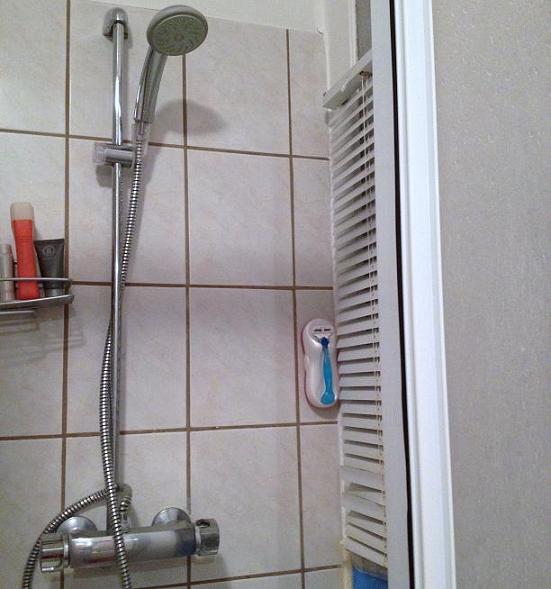 The shower with plenty of hot — almost scalding — water was especially comforting. 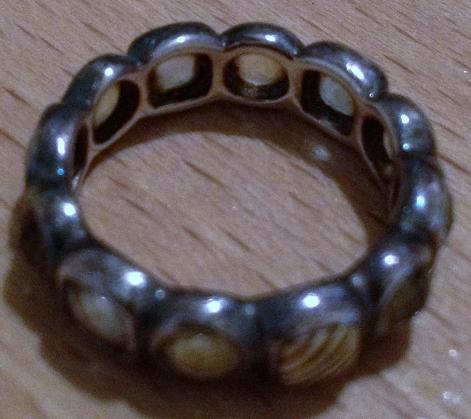 But it did the strangest thing to my ring — washed the sparkle right out of it. (Thankfully returned with elbow grease and toothpaste back home.)

Turns out most of the water in Icelandic households comes right from the ground already steamy.  And smelling like rotten eggs. To us, this was one case where natural wasn’t necessarily better. We loaded up on bottled water, to the amusement of a convenience store clerk who told me only the tourists won’t drink the tap water.

Anyway, we arrived on December 26, which in Iceland was still technically Christmas. (Apparently it’s a two-day affair there.) So we had Christmas dinner.

I arranged this through a site called Friend in Iceland.  For a fee they’ll help you customize your stay, arranging anything you’d like. 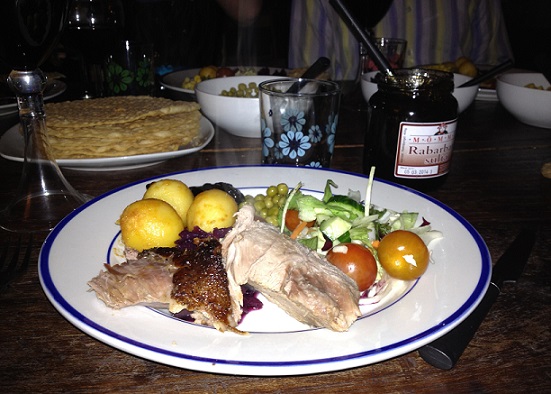 Our host for the evening — a filmmaker — took us to his flat, where he served up his version of his grandma’s traditional lamb dinner. 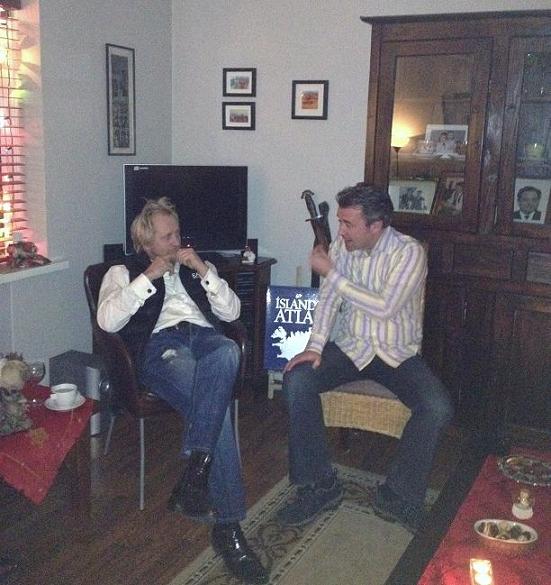 The other guests included a guy who calls himself the Frank Sinatra of Iceland. That’s him on the left.

After dinner, he serenaded us. Oh, my. Iceland’s Got Talent. (Check him out. He also sings Mack the Knife in Icelandic.).

Fortified with good food and sleep, we were ready for a full day of wandering the country on our own.  Until we were told the roads could turn terrifying in an instant. And we’d better let the local search and rescue team know where we were headed. 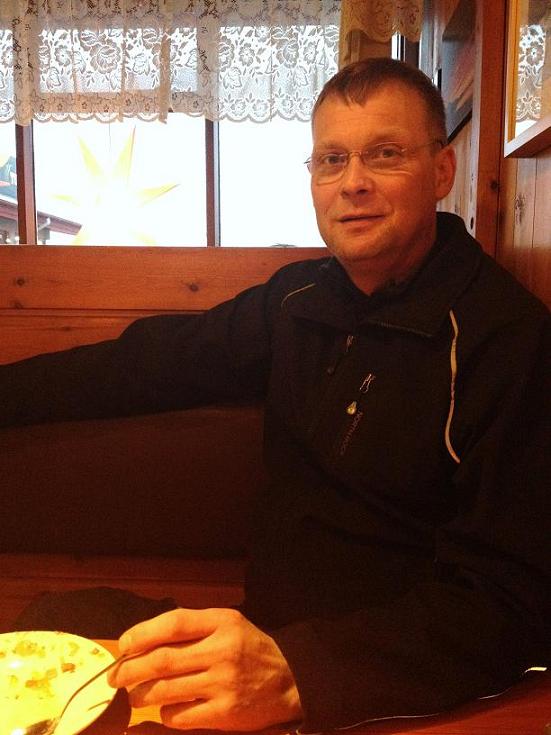 As they say in Icelandic: Fuggedabowdit. We found a professional guide who knew the terrain.  It wasn’t cheap — $400 for the day — but we were OK with that.

Had it been summer, with Iceland’s endless daylight, we would have gone it alone, no sweat. 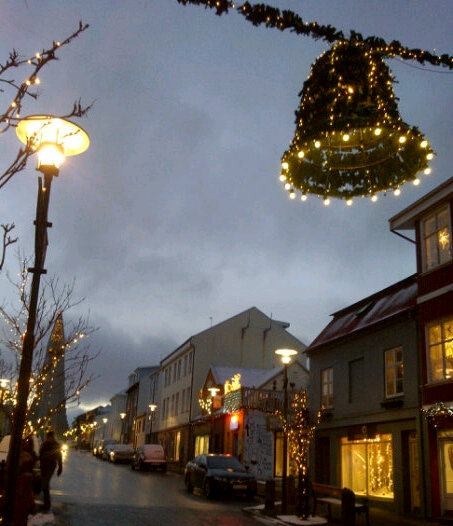 But in December, the sun didn’t come up until after 11 a.m. We had a lot of ground to cover in one very short day.

As soon as we got out of the city into the mountains, the weather alternated between snow and freezing rain. The roads were indeed tricky.

Thanks to our guide, Oddur, who’d lived in the states and was happy to take us everywhere we wanted to go. 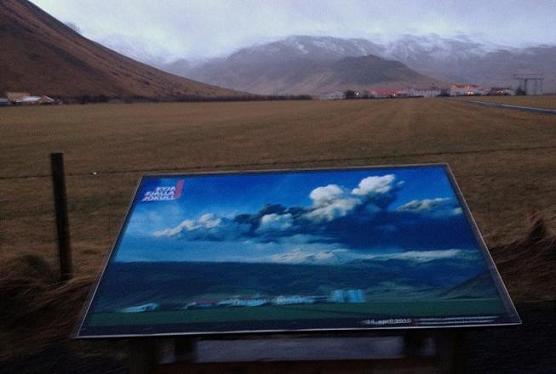 The volcano that went berserk in 2010. 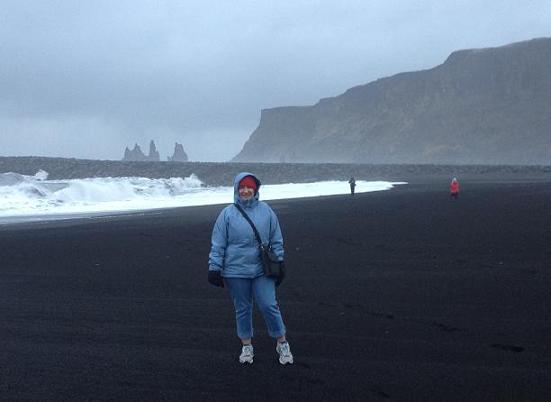 A beach of black lava sand that looked like velvet. I was so wowed by the view, I never did see that ocean wave sneak up on me. 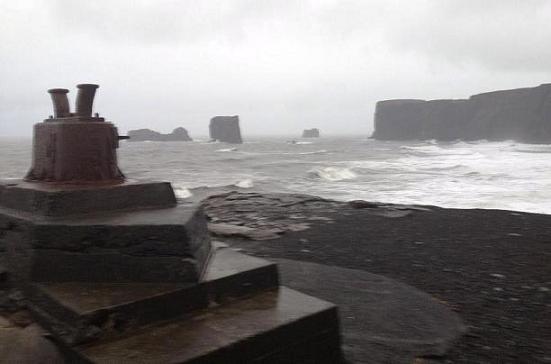 Here’s how windy and raw it really was. I’ve got goosebumps again just looking at this. 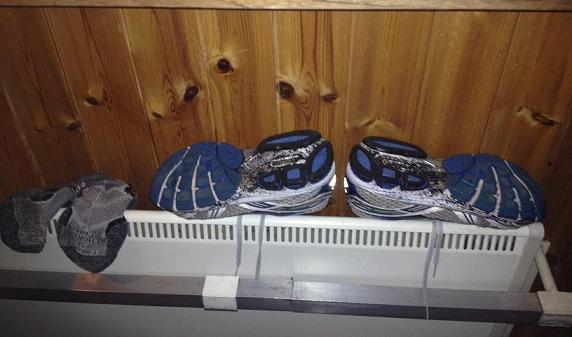 Extra socks courtesy of Oddur, while I dried my shoes after stopping for lunch. 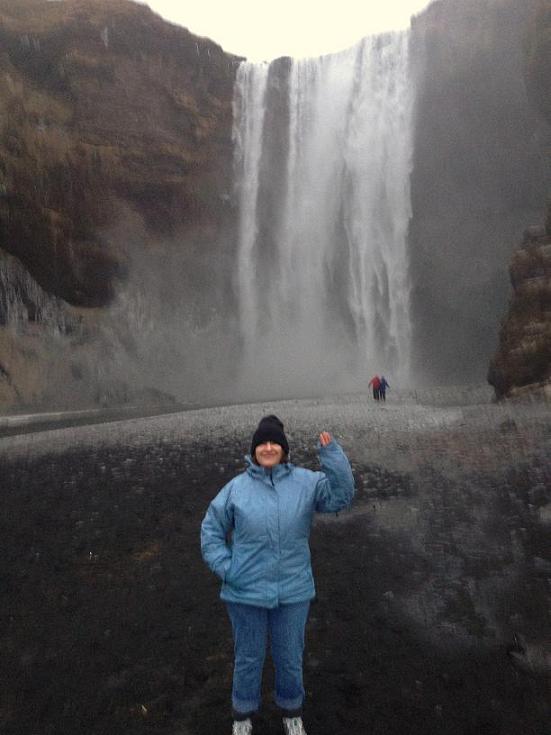 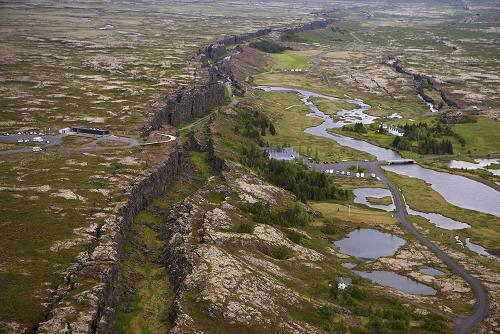 By the time we got to the national park, it was dark. (Here’s what it looks like in  daylight.)

But we still drove to the spot where North America meets Europe. You can actually walk the ridge that divides the continents. Unfortunately, it was too dark and rainy to try. 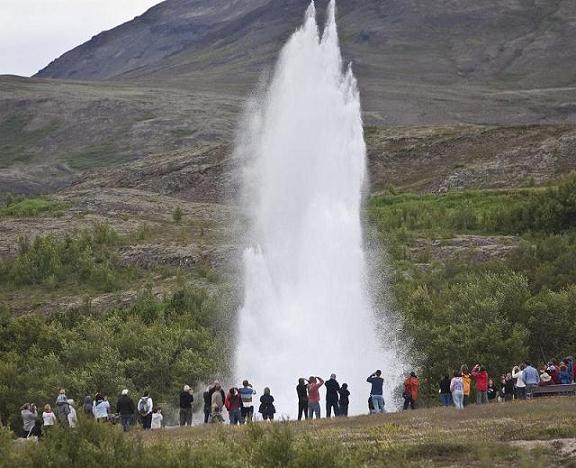 Then we were face-to-face in the dark with an angry geyser that “talked” to us every couple of minutes. Scary in the dark. (Again, here’s what it normally looks like.) 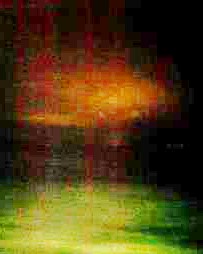 We got lucky and saw the Northern Lights in the evening sky. Supposedly, they’re easier to see in the winter. But there are no guarantees. Not a great picture. But there it is.

On the way back, Oddur helped some tourists stuck on an icy road. That could have been us.

The rest of the time we hung out in Reykjavik. One big Christmas card. 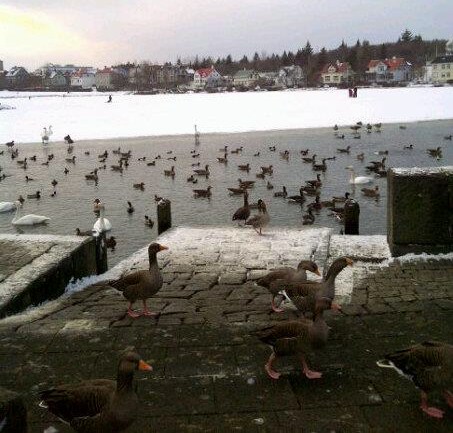 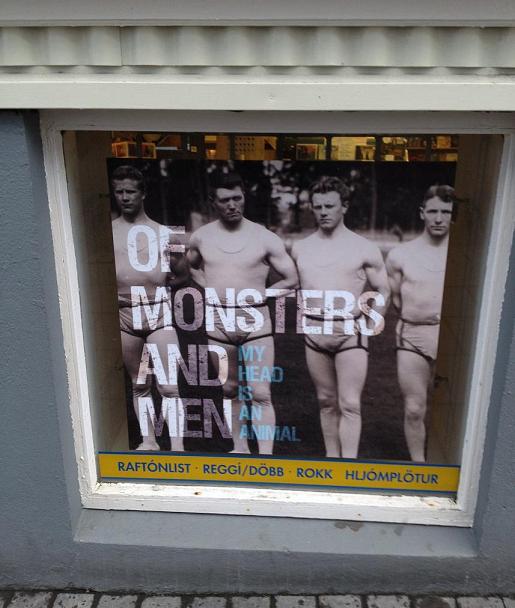 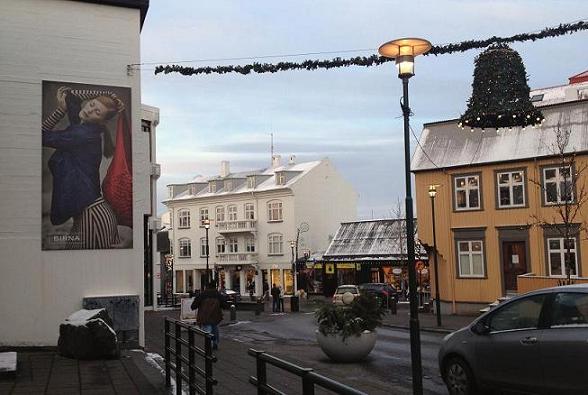 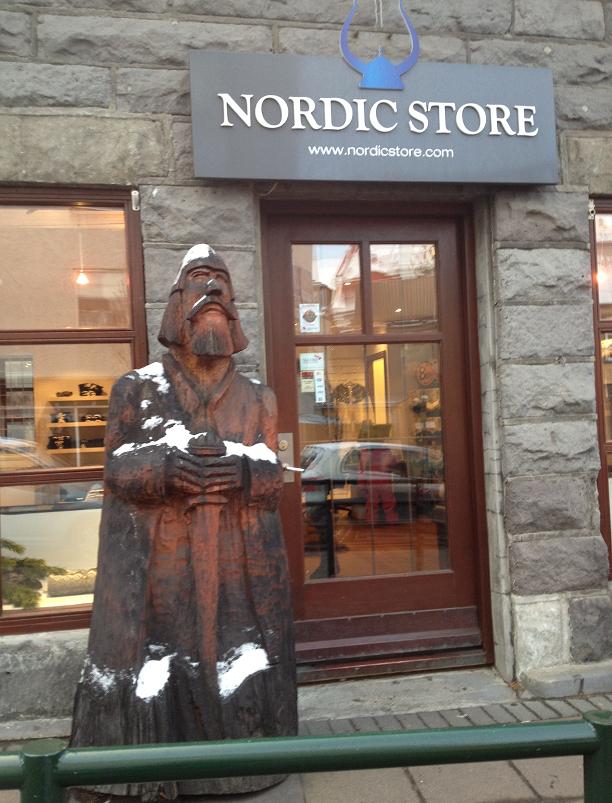 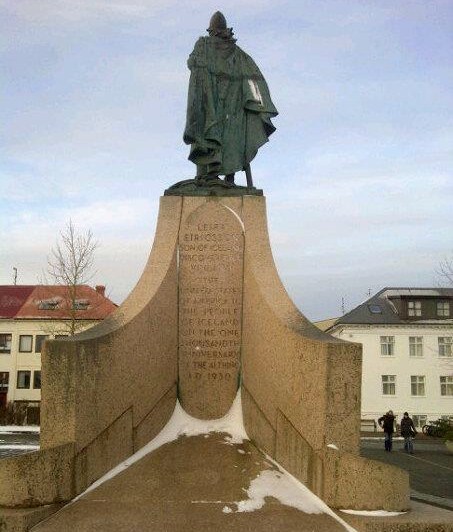 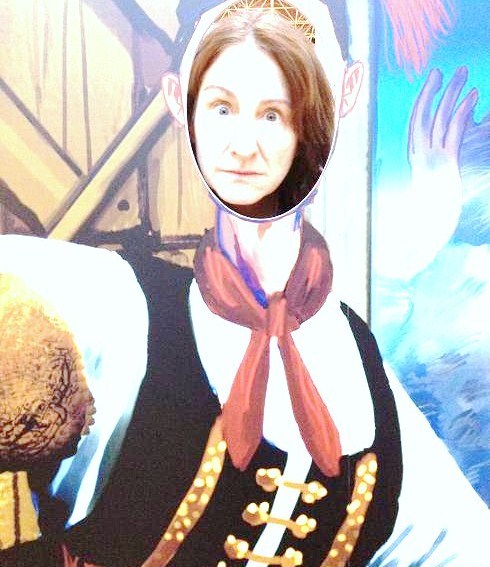 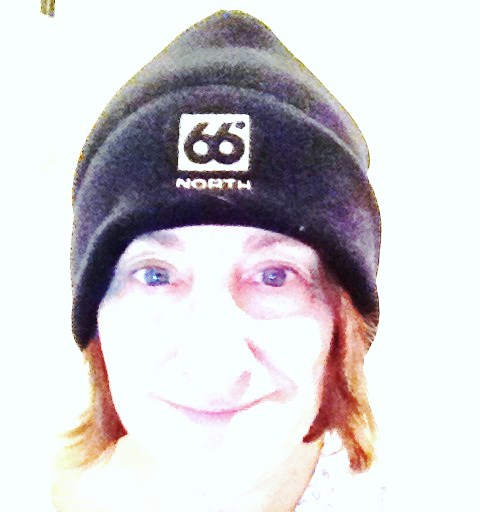 A new hat from 66 Degrees North, an Iceland outerwear shop that’s been around for almost a century. They sneer in the face of cold. 66 North, by the way, refers to the place on the globe where the Arctic Circle begins.

I did get to a hot spring of sorts — The Blue Lagoon. That’s next.

(Footnote: I know for a fact that Iceland — well, Reykjavik at least — is warmer than the Northeast U.S. Where I’m sitting right now in Pennsylvania is 16 degrees. In Reykjavik, it’s 36 degrees.)

That’s got me steaming.

2 Responses to Many reasons to visit Iceland — even in winter