Barcelona to Nice, by SUV

Posted on August 23, 2012 by planetlippstone

What do you do when you’ve done the obligatory Spring Break drive from Philly to Miami?

You could drive cross-country, which I intend to do someday, I think. Haven’t gotten around to conquering that one. If I do, I’ll invite the Top Gear guys to do the driving. Have you seen that show? Those intrepid globetrotters. As my Aussie mate who turned me on to it would say: BRILL-yant.

Or you can drive from Spain to France. That’s what we and a couple of close friends decided to do on a whim a few years ago. Just because. Mitch and I had been to Barcelona separately.  I was there a long time ago when I worked at The Travel Channel, during one of my whirlwind trips and faintly remember a hotel room the size of a closet and not much else.

Thought it would be nice to go back, take more time and get a better look. And that it would be equally nice to travel along the Mediterranean coast. Picked Nice as the end point. From there, we would take a domestic flight to Paris and then home.

How do you do that? Took me about a week to get it together. Mapped it on Google and found places to stay along the way, courtesy of Expedia, Trip Advisor, Lonely Planet and whatever else looked interesting It would be summer, peak season, so I tried to get the best bargains I could. Booked it and then left it to fate.

Hardest part’s renting the car. And that wasn’t that steep. Did it online with Hertz because it was easy, and I didn’t feel like messing around with unknowns.

Here’s the route we took:

Flew from Philly to Barcelona. This time, it was a real, satisfying taste of Barcelona.

Hipper and more laid-back than Madrid, which I thought a bit stodgy, even though they party all night there. Great Mediterranean cuisine, as you’d expect, duh … heavy on the veggies and olive oil. And how is it possible to have better gelato than Italy and Rita’s? But it did. 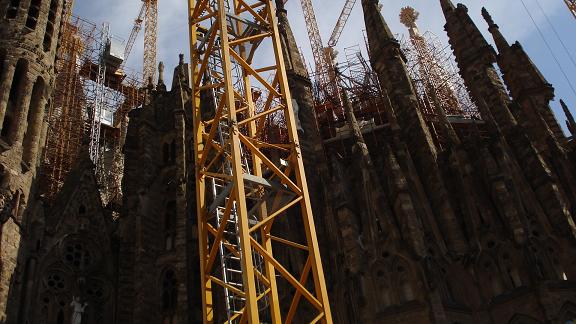 Construction at Barcelona’s famed La Sagrada Familia, or Holy Family Church, has been ongoing for more than a century.

Barcelona is colorful at every turn … 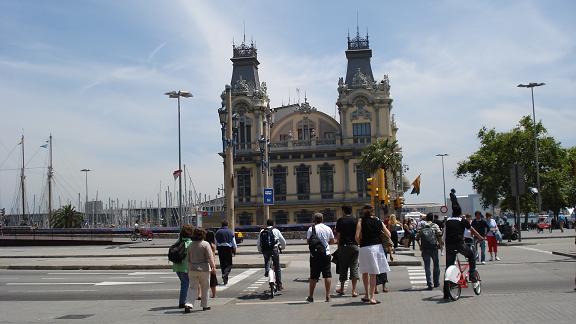 With a harbor that’s sort of a cross between Madrid and Baltimore.

With a bit of trepidation (I was hoping there were no — how do you say it in Spanish — screw-ups –) we picked up our rental car at Barcelona airport. A nice, roomy Citroen SUV. No sweat.

The freeways could have been anywhere. But I do recall being wowed by the highway restaurants in Spain. The food was fresh and plentiful. Better that the hot bar at Whole Foods. Not a plastic cheeseburger or chicken leg in the joint. Was like being at a bar mitzvah with all the dessert choices. And refreshingly, no Starbucks. 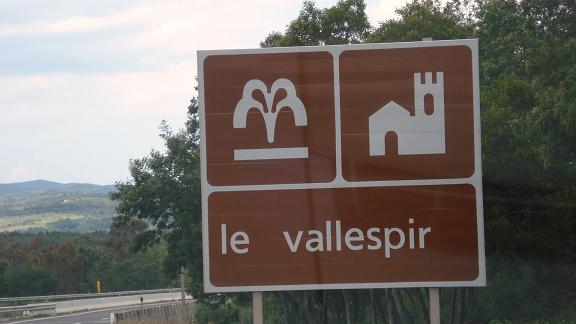 I thought crossing the Pyrenees from Spain into France would be much more eventful. It wasn’t. No Viva La France! or whatever. 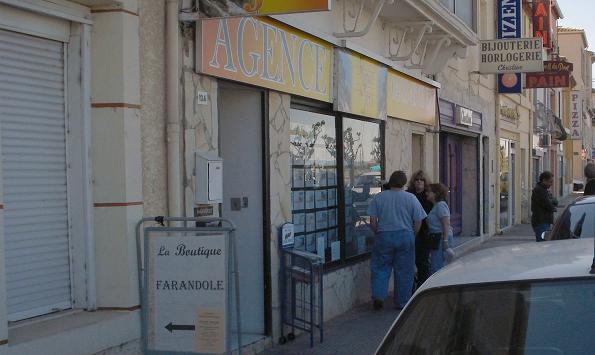 Stopped at some scruffy seafaring town along the Mediterranean. The kind of village you’d see in some nondescript French movie. The proprietor at the local bar didn’t know what to make of us four jabbering Americains. I struggled to utilize my college-level French to order some coffee and tea. He responded in English that was as bad as my Francais.

There were places like that in the distance all along the way. The only thing breaking up the monotony was an IKEA somewhere in France. I was all ready to stop in for the Swedish meatballs, but we forged ahead.

Our next stop was Arles, in the heart of Provence. I picked it because I’m a fan of Peter Mayle and his love for the region with its ancient Roman roots. It was just as I’d pictured.

But I didn’t opt for what was shaping up to be some kind of protest at that building in the background. Luckily, things didn’t get out of hand. 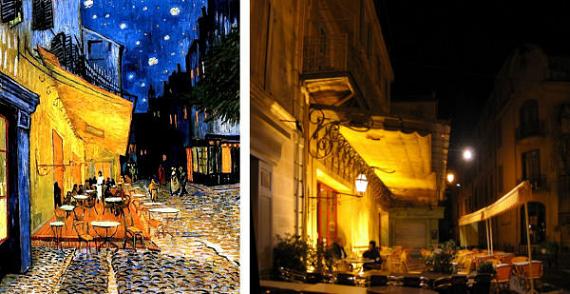 It was magical walking around the cafe where Van Gogh hung out and did some of his best work. A Best Western hotel was all that was available when I was booking the trip. Would Vincent have stayed in a Best Western? Even if that’s all he could have found on Expedia, I doubt it.

The food was … so Provence. A scene out of a Mayle book for sure.

Then, Nice. So nice. Especially since it was the Grand Prix weekend in nearby Monaco, and we had the place to ourselves.

The hotel, however, wasn’t so nice — everything was booked out, and it was all I could get. It was called the Hotel Apogia, and every time I think of it, my back hurts. The bed was like a piece of cardboard. Mitch kept referring to the place as the Hotel Apologia.

But what it lacked in comfort, it more than made up for in location.

The entire staff doted on us at the Coco-Beach restaurant, said to be a favorite of the likes of Bono and Bobby (can I call him Bobby?) DeNiro. Fish so fresh, you select it yourself. Along with making your own salad sur la table.

From there, us high rollers hung out at the casino. I started with 20 Euros and ended up with the same fortune. Yessirree, I had the Midas touch. Such intrigue. I was hoping to be discovered by Michael Caine and Steve Martin a la Dirty Rotten Scoundrels. But the only attention I got was from a young couple who weren’t having much luck, and were impatiently waiting for me to clear out so they could commandeer my “lucky” slot machine.

We decided to cut the driving short and fly from Nice to Paris, and then home.

We got lost in Nice and made it to the airport in a panic. If we missed our afternoon flight to Paris, it was going to cost a lot more.

We made it to the end of a very long security line. Mon couer was in my throat, as I weighed our odds of making the Air France flight.

I was just about to seek out one of the French security people and quietly explain our predicament. But before I could, a voice boomed out EXCUSE ME. WE’RE TRYING TO MAKE OUR FLIGHT. CAN YOU LET US THROUGH?

It was my well-meaning friend who, bless her, wasn’t born with the shy gene and always gets the job done. It wouldn’t have been my approach, but it got us where we needed to be, much to my extreme mortification. On our Air France flight. What can I say?

In Paris we had a good time bopping around, discovering things I hadn’t seen before.

Found what was left of the old Jewish Quarter, swiftly shrinking to make way for gentrification. 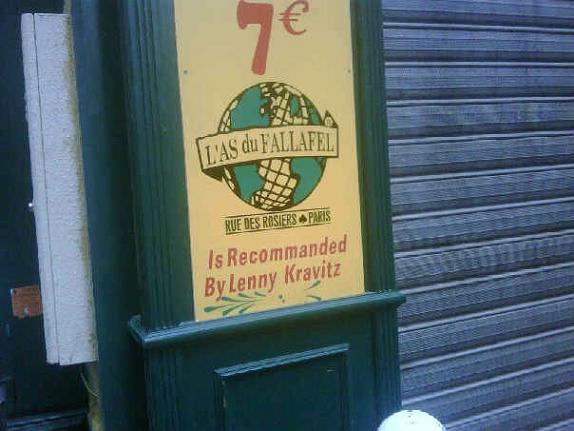 All that was left was an appetizing store and a falafel place endorsed by that arbiter of Middle Eastern cuisine, Lenny Kravitz.

As they don’t say in French or Hebrew: It don’t get no better than that.

1 Response to Barcelona to Nice, by SUV