Posted on July 1, 2012 by planetlippstone

Once again back in the Bronze Age, when I’d get pretty bronze, I decided to vacation in Rio de Janiero. Just because I’d never set foot in South America and thought it would be a good place to start.

I was working as a TV news writer in Nu Yawk. I just wanted a little Brazilian, as in, a Brazilian tan, to warm my not-so-lovely winter bones.

I needed a passport. In those days, all I had to do was stay inside Rockefeller Center and apply for one at the passport office. A little red tape, as it should have been, but not much.

Of course I don’t have pictures of actually being there. Again, these were the days when I couldn’t be bothered. Maybe because I worked with videotape all day, I didn’t want to be bothered with more images. OK, didn’t want to mess with a camera. Of course I get PO’d at myself now when I think about all those great moments I’ve merely consigned to memory. Which is certainly better than nothing. 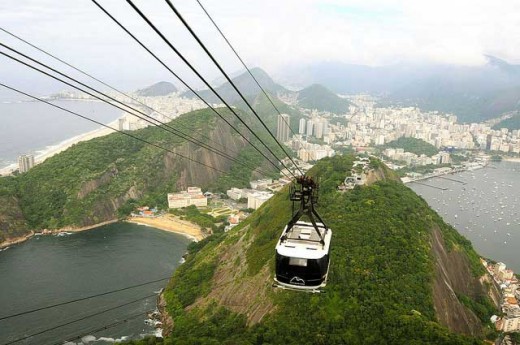 What I found out was, beyond pretty Sugarloaf Mountain (yeah, I did the cable-car thang)  and Copacabana Beach, Rio was a dangerous place. I’d heard thieves would no sooner cut an arm off to get at some bling. Especially the arms of unsuspecting tourists.

So I didn’t wear any jewelry. Not that I had much. (I didn’t pierce my ears until I was well into adulthood, when I realized I was missing out on a big, beautiful world of chachkas.)

I put the barest amount of cash in the leg of my cargo pants. And got so tan, as I foolishly did in those days, that I blended in with the locals. No one was quite sure what I was; least of all, me.

(Actually found a picture from same time period. Sort of like this, taken in a newsroom, but I was much more tan in Rio.)

I was so dark when I returned to work, a fun colleague named Al Roker couldn’t get over it. We jokingly compared hands. (These days, I show my hand to my dermatologist when I go for my yearly checkup — a preventive measure after all that mindless sunning.)

Anyway, I wanted to see something more of the city. So I took the buses into the local neighborhoods. Colorful; good food. No one blinked an eye at me except some guy who turned out to be from Delaware and married. Ewww. Not sure what was worse. Just kidding.

It wasn’t until long after I returned that I found out I had been hanging out in the favelas, the notoriously dangerous slums. Now a tourist hotspot. Sooner or later, everything is.