Now’s the time to plan that trip to Alaska

Not because of Sarah Palin. Because of my late dad.

He was stationed there during World War II. I think he was up in Nome, which really did look intriguingly close to Russia on a map.

His eyes always lit up when he talked about it. I wish I’d pressed him more about his Army days. All I know is that he was a medic, and he once went duck hunting when he wasn’t on patrol.

Now that I would have liked to have seen. Dad,  a Jewish kid from the South Bronx, duck hunting in an America that might as well have been another country. I vowed to get a taste of what he was talking about some day.

I finally got the chance a few years ago. Mitch’s cousin had booked a trip to Ketchikan and invited us along. It wasn’t Nome,  but it was as close as I was going to get in the foreseeable future.

Alaska’s size in relation to the U.S., and places mentioned.

I first thought the whole state was one big freezer, a la Ice Road Truckers.

As you can see, it covers a lot of ground.

Ketchikan is Alaska Lite, in terms of harsh weather. It’s in the southernmost corner of the state, bounded by the Pacific Ocean and Canada. Ninety minutes by plane from Seattle. Has a climate on a par with the Pacific Northwest.

Summer temperatures are in the low 60s; winters don’t get much below 30. When it’s not snowing, it’s raining.

We were there in August. It was jacket weather, cool and overcast. Summer is peak season, and there are more tourists than residents, so now’s the perfect time to start planning if you’ve always wanted to go.

Unlike the hordes of tourists who come up that way by cruise ship, we decided to stay in town for five days (tacked a quick look at Portland, Oregon, on the way back.) 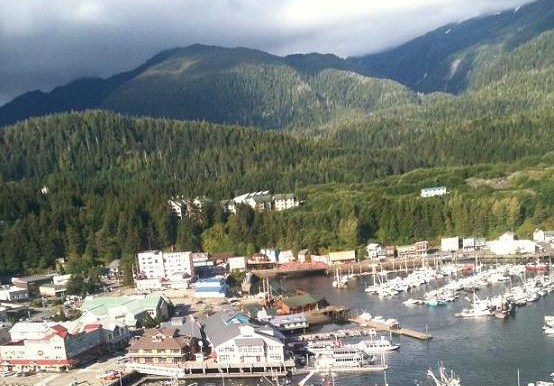 A ferry connects the island airport to the city.

Ketchikan started out as a fishing and logging town.

When the timber industry went bust the place turned to tourism. This is Creek Street, once the red-light district … 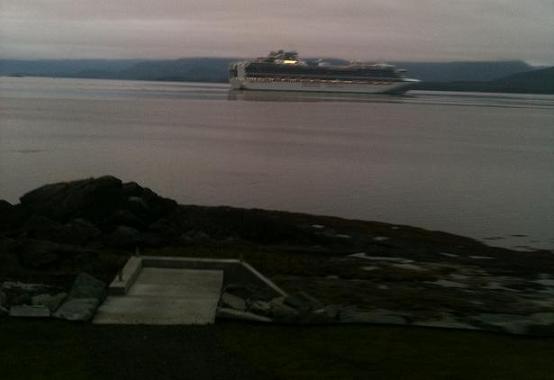 Six of us shared a cottage on the water so the cost wasn’t too astronomical. Here’s the view from our back porch around daybreak, 4 am. First I thought I was seeing things because I was so jet-lagged. But that really was a cruise ship gliding past.

The height of summer in the city.

We decided to explore Ketchikan’s back yard back yard from a teeny-tiny plane. You know, the kind of plane that crashed the same week we were there, killing a big Alaska lawmaker. I, who am never scared to board anything, was a little apprehensive.

Up in the air, I was too awed to stay scared.

But when we landed on the water to try to get close-up and personal with wildlife (not much around that day), I was holding on for dear life. 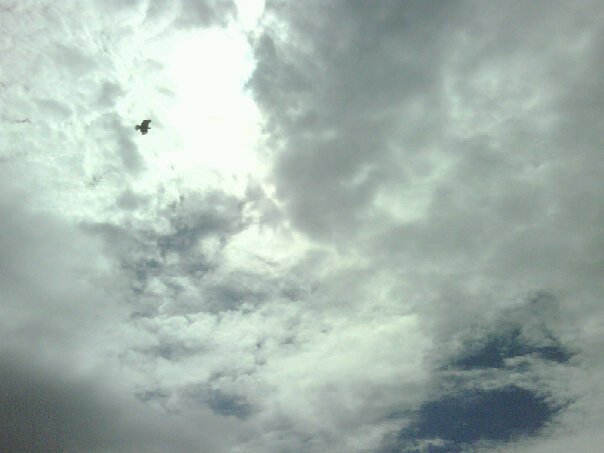 A ship featured on The Deadliest Catch is now based in Ketchikan and offers the chance to be a crab fisherman for the day.

We didn’t do that. But in this so-called salmon capital of the world, Mitch, who’s used to eating herring from a jar, snagged dinner.

Other culinary specialties include the (shudder!) reindeer sausage and bison burgers. I stayed away from both. But I couldn’t resist some clam chowder that actually originated in Seattle. Better than some of the local stuff. It’s now my favorite.

Ketchikan is also home to many totem poles and a native American village with woodcarvers who still make them by hand.

Each one tells a story.

Here’s more info about visiting Ketchikan (including lodging) and Alaska.