Why I did my Valentine’s Day shopping in Pawnee

Posted on February 13, 2012 by planetlippstone

This Valentine’s Day, no Victoria’s Secret, Pandora or PajamaGram for me.

Though I have to say by the end of the day, I’d had so many Kisses, I was in sugar shock. Don’t think I’ve had one since. Trust me, that doesn’t mean I gave up chocolate (see below.)

Thankfully, no shots of me in the tub. I wanted to keep this somewhat tasteful.

But I did take home this memento. I’m saving it for a special occasion. Actually, I’m afraid to open it for fear I’ll start eating it by the spoonful.

This year, did my Valentine’s Day shopping in Pawnee. 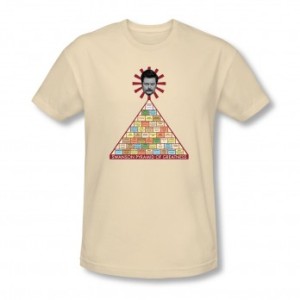 Mitch custom-ordered his T-shirt from the NBC Universal Store: The Swanson Pyramid of Greatness. I couldn’t read the fine print. But knowing Ron Swanson, it’s indeed gotta be great, and I know Mitch will wear it proudly.

If you follow the NBC sitcom Parks and Recreation, you know just what I mean about Ron. If you don’t, let’s just say he makes meat-and-potatoes gourmet; with a delicious, deadpan delivery. Macho, yet sensitive.

Ron (Megan Mullally’s other half, Nick Offerman) is the smartest guy in the room at the Parks and Recreation Department in fictional Pawnee, Indiana. Otherwise known as “The Akron of Southwest Indiana” and “First in Friendship, Fourth in Obesity.”

Ron’s the boss of Leslie Knope — the deputy director who wants to make a difference. Played to the earnest hilt by Amy Poehler.

Lots of sly digs at local government bureaucracy. With great turns by Rob Lowe and Aziz Ansari,  who plays — of course! — a guy named Tom Haverford.

Have to say I didn’t like it at first. I thought Amy Poehler was trying too hard. But I started finding myself laughing at old Ron, and then the whole bit started growing on me like poison ivy.

Then I went shopping for a little Valentine’s something  for myself. Wandered over to the 30 Rock site. 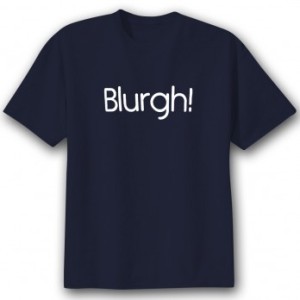 I don’t normally sport geeky TV show T-shirts. But since 30 Rock is one of my very favorites, if the T-shirt fits (let’s hope) … I went for the Blurgh! model.

Again, anyone who knows Liz Lemon will know what I mean.

I was kinda disappointed in the selection. Sorry there wasn’t a piece of fake pizza, modeled after the mess peeled off the office wall of that supposed party animal, NBC News’ Brian Williams (who’s almost a 30 Rock regular).

I used to work with the guy, who was as meticulous and professional as they come. That’s why that I howled at that goof on him.