Posted on December 24, 2011 by planetlippstone

The holidays are always special, but even more so for me. It’s been a tradition for Mitch and me to take a vacation at the end of the year. We’re not exactly high-rollers the rest of the time. Travel is our one extravagant present to ourselves.

It’s usually not that rough on the wallet because we explore in the off-season. One year it was Bermuda. Settled for the heated indoor pool in a gorgeous location. Last year, Prague.

This time of year reminded me of the journey that sparked this travel tradition several years ago: Quebec City, in Canada. A little piece of France we could actually drive to.

It was so impromptu we put it together in one day. Once we decided not to stay home for the holidays, we started thinking exotic. And hit on Quebec.

I’d heard it was the most French place in North America. That was enough. Then when I saw one of the world’s most-famous hotels, the Chateau Frontenac, was having a big winter sale, we splurged for a couple days.

Of course the price was right. Who would head to the Great White North for Christmas? Everyone else was headed to places with real palm trees. 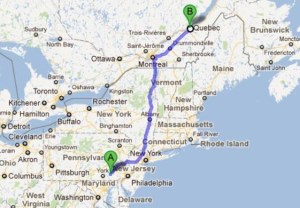 We hopped in the car around dinnertime, knowing it was at least an 11-hour drive from Pennsylvania to that part of Canada. That’s with ideal conditions and a vehicle capable of going the speed limit.

The winter weather was dicey. Since we were heading due north, odds were we’d run into slick roads somewhere.

The vehicle in question was a Mazda sedan that would start overheating around 55 miles an hour. Mechanic had no idea what was wrong, so his advice was: Don’t push it.

My car was worse for such a long trip. It was also a Mazda;  a Miata with stick shift. Mitch never even liked to travel in it around the block, let alone a 600-mile schlep. Who could blame him? His turned out to be the lesser of two used cars.

It was drizzling when we started in PA. About an hour and change, somewhere in New Jersey, it started pouring. And I started pouring sweat, worrying about the car’s limitations.  Maybe we should quit while we’re ahead, I said.

No, countered Mitch, starting straight ahead. I marveled at how he could see through the waterfall streaming down the windshield. I left it to him, because I secretly didn’t want to turn back.

We got excited crossing the New York border. Fortified with hot chocolate at a Starbucks. Whoopee! About a quarter of the way there.

Our enthusiasm waned north of Albany, NY.  The ride started being a drag. We were getting tired and starting to look for a toilet.  You’ve think an interstate in upstate New York would have such things in abundance. You’d be wrong. 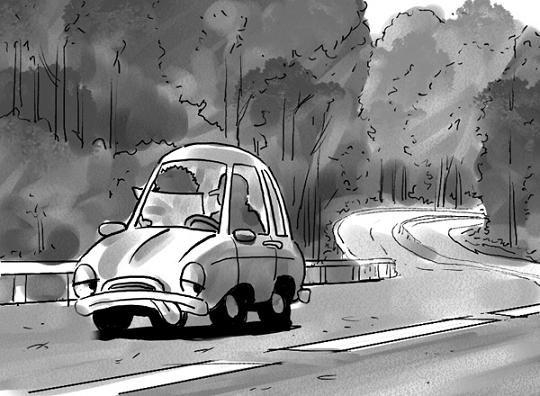 Nothing. For many, many miles. We were punchy at this point, and increasingly antsy searching for a loo. We took a random exit, figuring there had to be something off the interstate. Just some weirdly abandoned cars. We beat feet and headed back on the interstate. Rolled the windows down and turned the radio up to remain conscious.

Didn’t find a motel until the middle of the night when we hit Plattsburgh, NY, near the border. Never mind that it was a Motel 5. We gratefully crashed.

Got some good sleep, moved on into Canada (hooray!). Just three more hours to Quebec City.

The Canadian highway was the same as ours. ‘Cept everything was in French. 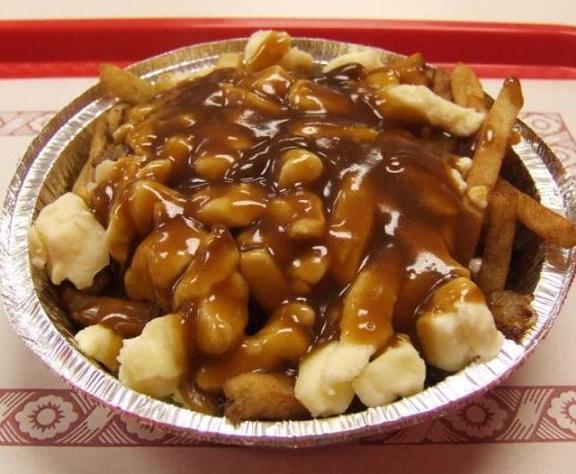 Instead of Burger King at the travel plazas, there was something known as poutine. Divine, belly-busting cuisine said to have been invented in Quebec. French fries topped with cheese curds and gravy. Great stuff on a wintry Canadian day. Truly one of the best things I’ve ever eaten.

Finally, an exit led to this make-believe, fairytale place: Quebec City. Like a movie set of a big French village. Or the Paris casino in Vegas. Quebec wasn’t the real Paris, but it was a lot closer than Vegas. 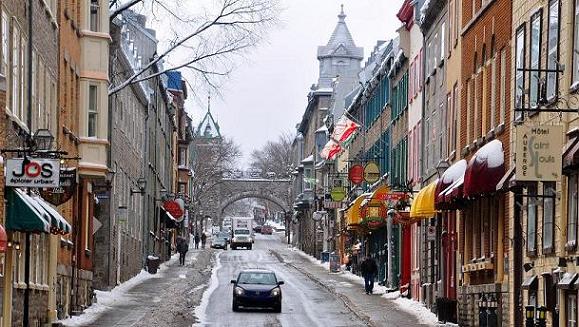 Old Quebec, which takes in a pretty big area, took our breaths away. Not because it was freezing; it’s truly a dazzler. It’s a United Nations World Heritage Site. (I’ll be featuring more of them.) Lemme tell you, those U.N. folks have good taste. Some of the most extraordinary places on the planet are on that list. 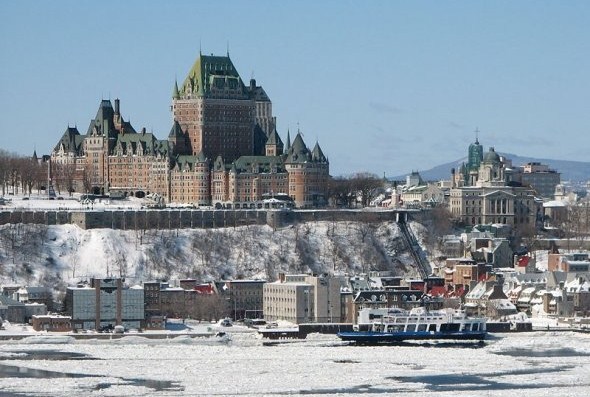 Amazingly, it didn’t start snowing until we reached the hotel, which also had us bowled over. This gigunda chateau, perched on a cliff overlooking the St. Lawrence River and much of the city.

Quebec City goes back to 1608, when it was founded by the French explorer Champlain. It became the capital of New France. Part of Old Quebec is still surrounded by the very same walls that defended the place in  colonial days. 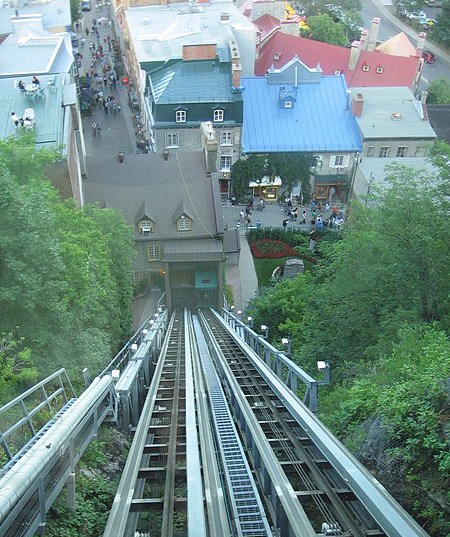 For the ultimate in charming, the historic district is divided into two parts: the upper city with its walls, and the lower city with its harbor. Like an elaborate department store with two floors. They’re connected by either a long stairway or cable car. Both are fun.

And on each level, every kind of cute French cafe, boutique, bistro and boulangerie imaginable. Some tourist traps, but others the real deal. How do you say that in French?

We no sooner checked in than we made a beeline for an adorable little bistro where we devoured luscious fondue. Best part was we didn’t need to go all the way to Paris for it. Deliciously worth the pain-in-the-butt ride.

The snow that had fallen turned to ice. Sure, one false move and, another broken wrist. (I’d broken one years before, so was trying to be extra-cautious.) Mostly, I really didn’t care. I just wanted to walk everywhere. It’s that kind of place. 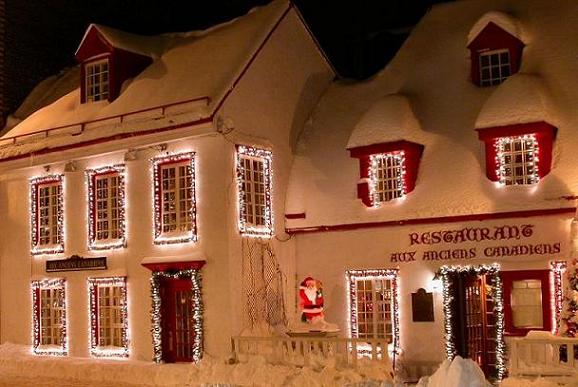 We stumbled onto a place specializing in authentic Quebecois fare. Which is to say a fusion of French and frontier.  Where you could start with an escargots appetizer, elk or caribou for the main course, and finish with maple syrup pie. We did all three. (Yeah, confess I tried caribou.)

For the ultimate in luxury, we treated ourselves to Christmas Eve dinner at the hotel. Waited on hand and foot for a 12-course meal. (I think; I lost track after the third course). Good thing we drove, because the meal was approaching the cost of plane fare to Paree.

I needed a new winter coat and found a surprisingly warm, yet cute, jacket made by a Danish company. 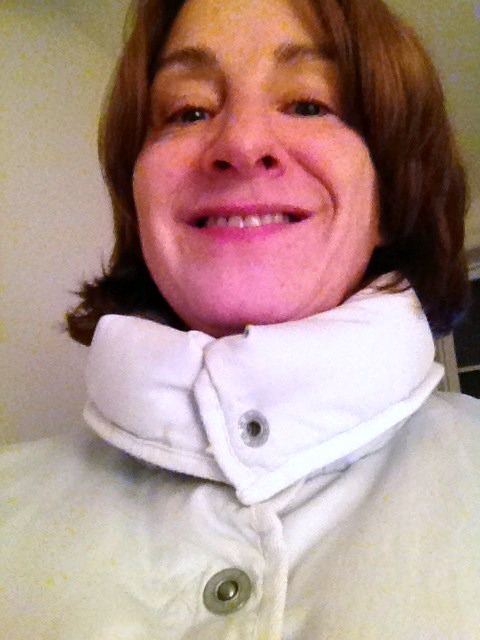 I wear it to this day. It’s like I’m wrapping myself in Quebec all over again.