Posted on December 18, 2011 by planetlippstone

Reading about the unrest in Russia and realizing it’s only marginally better than it was   when I was there 20 years ago. When it was still the heart of the Soviet Union, the USSR; a quilt of republics governed by one party in Moscow — the Communists. They, with their Eastern European and Cuban allies, repressed a big chunk of the world. Hence the figurative term Iron Curtain.

The current protests are said to be the loudest since 1991, when the USSR finally collapsed and the Iron Curtain fell with a thud.

I was there just months before that happened. Rather than stay at some bland hotel, I opted for a new program that allowed foreigners to stay with Russian families in Moscow, and what was then Leningrad.

I was able to do this because the Soviet leader, Mikhail Gorbachev, was trying out reforms that encouraged more freedom and a dollop of  private enterprise. But the clash of old and new sparked things like strikes and food shortages.

I didn’t really know what kind of cauldron I’d be stepping into, or whom I’d be staying with.

My only point of reference was the old Soviet Union. The one I grew up with. At that time, the world’s other superpower and America’s archenemy. The Bad Guy. Foe of free speech and capitalism.

The reason for the Cold War, early James Bond and corny Alan Arkin movies, and air-raid drills when I was in second grade. (For you young ‘uns, those “fallout shelter” signs you still see occasionally are a stark reminder of when we lived in constant fear of nuclear war with the Soviets.)

My paternal grandparents, from Russia and the Ukraine, in NYC.

Plus, I was a Jew. The last time my people had any encounters with Mother Russia, they were coming  from there to escape persecution.

I armed myself with cigarettes for gifts and toilet paper for myself, and hoped for the best.

Some guy picked me up at Moscow airport. I had faith that he was with the company I booked with, but who knew for sure? I felt much better when he deposited me inside a modern apartment building that could have been anywhere, with two women whose smiles were as warm as the flat.

With 'Mom' in living room.

Hanging out in kitchen with daughter.

Ludmilla — mom — and her grown daughter Natalie were my hosts. They spoke very little English and I spoke absolutely no Russian. We ended up getting along beautifully.

Mom, an artist, was like a Jewish mother. Made sure I ate. Plenty. I knew there were shortages. So when I asked where all that food was coming from, I was told “black market.” Tucked me in. Took me to the Matisse exhibit at the Pushkin, which we both adored. (I still have a Matisse print inspired by that visit.)

When I offered to treat Natalie to McDonald’s after she skipped work at her design job to take me sightseeing, she politely refused. Said she could have better food at home.

Outside, we were on our best behavior, taking in all the symbols of the Soviet Union. 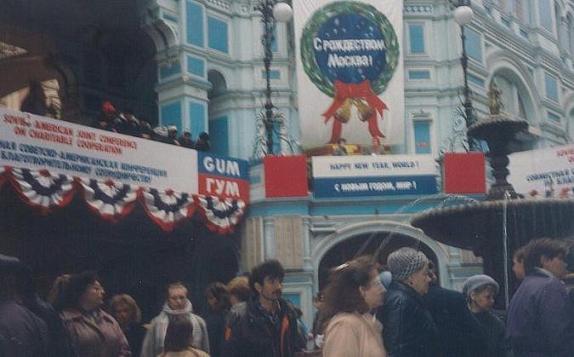 But inside the privacy of the apartment, we talked politics. They were critical of Gorbachev and his government. I couldn’t believe all the honesty flying around. Reforms or no, I expected the police to come barging in any minute.

From there took an overnight train to Leningrad. No more intriguing than being on Amtrak from Philly to New York. The only thing of interest was Annie Lennox singing Winter Wonderland on the loudspeaker with some light snow on the ground in October.

Stayed with a young family. I felt right at home when they served me kasha for breakfast. It’s one of my favorite side dishes. Jewish comfort food, adopted from the Russians. While they ate it as a sweet cereal, I’m used to having it with fried onions and noodles.

They were very nice, but weren’t outspoken which was good, since they didn’t speak any English either. We kept things pleasant and I kept to myself.

The cigarettes went quickly — everybody smoked but me. And my toilet paper wasn’t necessary. What was there was just fine.

Here’s the story I wrote about the home stays for the L.A. Times. (Extra bonus: It’s archived under the toilet paper collection — nice touch! — and has ads for those ISO cute Ukrainian chicks.)

For the rest of the story: I was on my own sightseeing in Leningrad. I was a huge fan of the tale of the doomed last monarch, Czar Nicolas and his Rasputin-adoring wife, Alexandra, and jumped at the chance to see their family’s palace in Leningrad.

And I didn’t want to leave Russia without meeting some Jews and seeing how their lives were under Soviet rule. A topic I couldn’t broach with my Gentile hosts.

Where to find them? I gambled on Leningrad’s largest bookstore Sure enough, I spied an earnest-looking guy with beard and glasses. Asked him if he was Jewish. He was; and he spoke English.

Turned out to be a doctor who’ve actually been treated for leukemia at a hospital in the LA area, where I’d just moved. He and his wife, also a doctor, were only too happy to show me around. 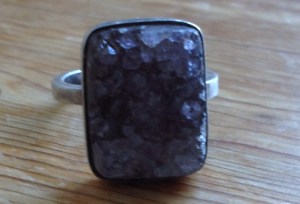 They took me to visit a friend who wanted to be an engineer but was resigned to being a jeweler because Jews still couldn’t be engineers in the Soviet Union. I bought a ring from him to help get him to Israel, permanently.

In the course of conversation, the doctors told me they didn’t make nearly as much as their counterparts in the States. They also asked me if I’d mail a book to a relative in the States when I returned because the mail was ridiculously slow.

Sign asking for donations refers to both Leningrad and St. Petersburg.

And I’d heard talk elsewhere in my travels. Talk of possible government revolt. Folks were already openly referring to Leningrad as St. Petersburg again — its original name before the Soviets took over.

I felt so bad for my fellow Jews, I was tearing up. Sad for them, happy for me. I had the good fortune to live in a country where I could do what I wanted.  These people had dreary winter weather in October; I’d just moved to the beach in sunny Los Angeles. I felt so lucky. What would happen to them if there was another revolution?

I was never more happy to leave a country. But I barely made it back to Moscow airport on time.

I, who always prided myself on navigating subways everywhere in the world, had a hell of a time with Moscow’s. The Russian alphabet was so confusing, and the subway was moving so quickly, I couldn’t figure out where I was. And no one spoke English. My pulse returned to normal when I finally arrived, cleared Soviet immigration, and boarded the plane back to London.

If you’re interested in visiting, it seems there’s much less, pardon then pun, red tape, these days. Lots of info on the Net to get you started.

I’d give ya this leftover Soviet coin, but it’s worthless now.

Up next, behind the Berlin Wall. Now, there are tours of what’s left. When I was there, it was the real thing.

2 Responses to Behind the Iron Curtain, Vol. 1: Soviet Union