Posted on December 10, 2011 by planetlippstone

I’ve been taking a little break and, I confess, losing myself in the Showtime series Homeland.

Yeah, I’m way late to the game,  as I usually am. Because I used to work nights back in the day, I never saw Seinfeld and had to catch up later.  And I must be one of the five people who’s never seen even one episode of 24.

Maybe that’s good because since the 24 producers are behind Homeland, I can’t draw any jaded comparisons. I’m seeing it with new eyes.

I was so desperately looking for a replacement for my very old Sunday night HBO dream lineup of Sex & the City, The Sopranos and Six Feet Under.

Homeland definitely fits the bill. Missed almost the entire first season, so we’ve been watching on demand. I meant to watch just one episode the other day and ended up transfixed, hand clutching the TV remote all afternoon. Drugged.

Damian Lewis, a hunky Brit who does American accents just right and has this smoldering face, is just incredible. He plays a Marine sergeant who, left for dead after being taken prisoner in Iraq, miraculously returns home.

He’s hailed as a war hero. But a CIA agent played to paranoid perfection by Claire Danes suspects he’s been turned into an Al-Qaeda operative who’s plotting an attack on the U.S.

She’s right. But one flaw for me: The motivation for the Marine’s about-face seems unbelievable at this point, but I’m reserving judgment until I know more. 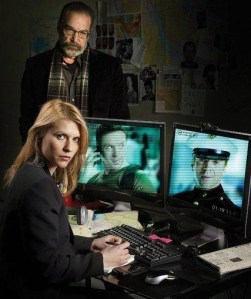 Danes  is also great in her obsessiveness with a capital O.

Many Patinkin, good ole Mandy Patinkin, as her boss, brings his usual rabbinical shtick to everything. Even when he’s gently interrogating a young American woman who renounced her privileged background to become a budding terrorist.

But of course, all is not as it seems. And like everyone else, I’m now playing “Who’s the mole?” Yep, I’m a goner.

An added treat for me is that this series, supposed to take place in the DC area, is filmed in Charlotte, not far from my sister’s. Real genius on the part of the location scouts.  Charlotte is a convincing understudy for the nation’s capital. And the surrounding area and a bunch of abandoned factories are great fill-ins for suburban DC, Mexico and the Middle East. 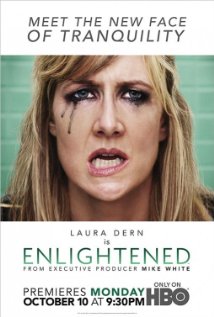 Also giving a shout-out to Enlightened on HBO, another favorite. Laura Dern does a fabulous job playing a corporate executive who has a meltdown and goes to Hawaii for some heavy-duty meditation, comes back, and expects things to be different.

She has a fine supporting cast in her mom, Diane Ladd, and Luke Wilson who, unlike brother Owen, can actually act.

According to the reviews, it’s the best show that no one’s watching. Sure hope it makes it to a second season because IMO, this story’s just getting started.

I’d write more, but it’s time for another episode of Homeland. Gotta run …

(I may get some Yorkshire Gold tea to sip while savoring next week’s finale.)