Posted on December 4, 2011 by planetlippstone 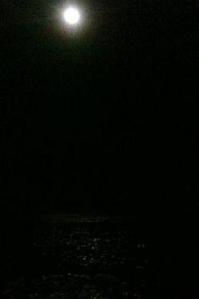 So I traveled almost the whole way around the world with an iPhone 3. You know, the one that doesn’t have a camera flash?  I didn’t. Thought it was somehow built into the camera. Never read the manual (par for the course), so had no idea that was the reason my night shots all looked like … night. Duh.

I really liked it otherwise, as opposed to its predecessor: a Motorola Razor or Slice, or Wedge or whatever it was, that lacked that certain something.

Anyway, bought a cheap camera at the equivalent of Best Buy in Australia to compensate for the lame iPhone 3’s. The real camera was a vast improvement, but it chewed up batteries quicker than Pac-Man.

Knew I had to remedy this soon. My sister’s iPhone 4 had a great camera by comparison, with a real flash. I was set to get one the minute I was eligible for a wireless upgrade in two months. I could wait.

In that time, Steve Jobs unfortunately passed away. Then it just so happened the iPhone 5 was gonna come out. It turned out to be the iPhone 4S, which got less-than-rave reviews.

But I thought that was the purists talking. I’d heard the camera was even better than the 4’s, and that was all I really cared about. Plus, the TV ads for Siri, the voice-activated “personal assistant”, also reeled me in.

So the moment I qualified for the upgrade — a few days ago — I was there. I, who never rush out to get the latest anything (though I wasted no time seeing the first Sex & The City movie, but didn’t repeat that mistake).

I confess: It wasn’t just the camera and Siri. I wanted a piece of history. Wanted to own this coy toy that had Steve Jobs’ mark all over it. 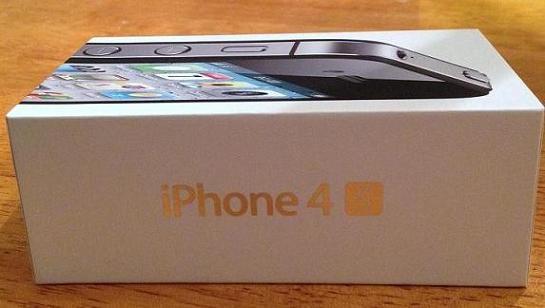 Brought it home, marveling as always at that come-hither packaging. Like it was a piece of fine bling. Considering the regular retail price (without the upgrade), it was. 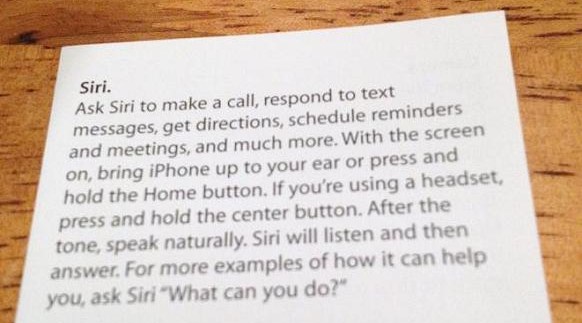 There were those all-important instructions about how to communicate with Siri. (I keep thinking it’s Suri, as in Cruise.)

I couldn’t immediately find the flash on the camera. When I asked for her help several times, she greatly misunderstood: 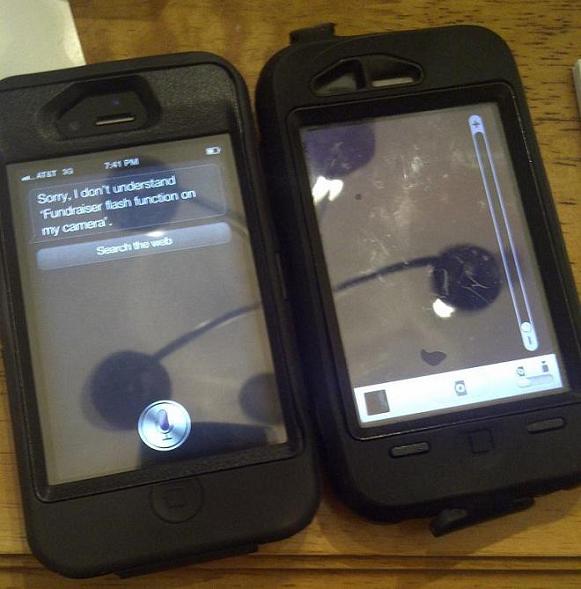 Siri, on the new phone on the left; my old iPhone 3 on the right. (BTW, much to my surprise, the new phone was bigger. I thought the next generation of Apple anything was always trimmer.)

I finally figured out the camera issue myself, thank goodness. Spared myself a trip to the always mobbed Help Desk — the Genius Bar — at the Apple Store.

I’m pleased with the camera.

But for anything other than basic questions about topics like the weather, Siri’s kinda dumb. She’s a whiz at making calls and sending text messages. But you have to know exactly how the recipient’s name appears in your contact list, or she stumbles.

And she doesn’t always get what you’re saying the first or the sixth time. (See above.)

Just for fun, I asked her the meaning of life. First, she said the obvious — it’s a philosophical question. Another time said she was pretty sure it had something to do with chocolate. A third time, it was 42 — a reference to The Hitchhiker’s Guide to the Galaxy.

I did have a serious question: Did Steve Jobs have input on my new phone? I asked in a way I hoped would lead to an Internet story with the answer.

“Apple doesn’t tell me everything, you know,” was her response.

About what you’d expect from a corporate type.

I’ll give her a break. She’s new on the job. Just glad I didn’t have to pay more than I did to hire her.