What does Michelle Obama know from matzo balls?

Posted on November 6, 2011 by planetlippstone

A reprint of a story in the HuffPo travel section. It’s been almost a year since Mitch and I took this winter trip to Prague. Last I heard, the endorsement was still there.

This has absolutely nothing to do with politics and everything to do with food. Jewish comfort food. I’m not talking hummus; that’s Middle Eastern. I’m talking the traditional Eastern European stuff I was raised on; that stuff that helps keep cardiologists in business. Matzo balls. Corned beef.

I was in Prague, in the Czech Republic, for the holidays. A sparkling diamond of a medieval city set in snow. My companion and I were determined not to let the numbing cold and ice-cube cobblestones keep us from exploring this beautiful place on foot.

We were searching for the city’s fabled Jewish Quarter, one of the oldest and best-preserved in Europe. The cold, the treacherous sidewalks, and tourist-dodging were getting old very quickly. 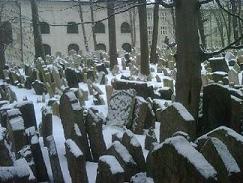 But we weren’t disappointed. We spent hours in that cold, mesmerized by a museum complex that included several unheated synagogues, a town hall, and a centuries-old cemetery, where people were stacked one on top of another because space was so scarce.

The Nazis deliberately spared this part of town — but not its people. The plan was to turn it into a theme park to show how the “extinct” Jews once lived. There were relics ranging from menorahs and prayer cups that were so incredibly old, yet so recognizable, to heartbreaking drawings by Holocaust children.

We were drained; so beyond cold; and ravenous for lunch. Which brought to mind that hysterical song about Jews: “They Tried to Kill Us, We Survived, Let’s Eat.”

But where? A few blocks away, the possible answer to our prayers. The King Solomon Restaurant. Offering up what was billed as traditional Jewish cuisine. The Czech Republic was on the fringes of Eastern Europe, I reasoned. How bad could it be? 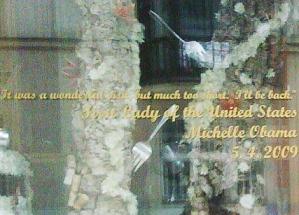 I ran in, scanned the menu; it seemed to fit the bill. Then the clincher. A glowing endorsement from Michelle Obama on the window: “It was a wonderful visit, but much too short. I’ll be back.” Sold.

The stuffed cabbage looked good; and again, I was willing to make cultural allowances for the veal stuffing, rather than the chopped beef I was used to. But it lacked that special sauce that makes stuffed cabbage, stuffed cabbage. It tasted like someone dumped ketchup on it without thinking. Too hungry to care anymore, I wolfed it down.

Maybe other dishes were better — my companion said the trout wasn’t bad. I understand, of course, that this wasn’t (insert your favorite Jewish deli here.) This was Prague.

As disappointing as the food was, the bill was even worse. It stung even more when I inquired about the first lady’s endorsement. Seems she was touring Prague and stopped in. The manager said she really wanted food, but there wasn’t any time. She had a beer and stayed about 15 minutes.

So she didn’t even eat there. Feh!