Posted on August 27, 2011 by planetlippstone

I know I said I had serious journalism work to do, and I do — lots of it on this weekend while I’m hunkered down waiting for Hurricane Irene to take a swipe. (Lancaster’s too far away to really be affected, IMO, but my partner Mitch went out and bought some kind of Desert Storm-type flashlight and Band-Aids. Said they were good to have. I think his Boy Scout preparedness is adorable, but I’m not worried.)

I wanted to take a moment to reflect on what WordPress said was my 100th post.

I’m still finding my way with this start-up that really got rolling with my round-the-world trip; and wanted to say thanks for all the great feedback. It’s a blast; and I intend to keep it up as time and work permit. Gotta put Haagen-Dazs  on the table. 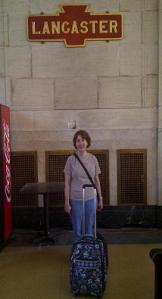 OK, I joke, but that’s another thing I need to address — the weight gain that accompanied this adventure. Let’s just say that if my body is a temple, I feel like it’s been firebombed at this point.

I started indulging almost four months ago when the trip started and — who am I kidding — haven’t stopped. I did do a ton of walking, some yoga for a photo-op in India, and occasionally hit the gym during my California sojourn.

But the eating far outweighed the exercise. It started with all kinds of verboten stuff for a health nut of a certain age like me.

As a journo — as we’re referred to in Australia — I know waay too much. We journalists are surrounded by information, and research is part of our training (or at least it used to be.) I take research to the extreme; therefore I’m a walking encyclopedia on disease prevention. Alkaline, anti-inflammatory, juicing diets; food and vitamins as ailment treatments; the hormone therapy and soy debates. Aerobics, weights, trampolines, yoga, meditation, Emotional Freedom Technique. You name it. Dr. Oz has nuthin’ on me.

But talking the talk and walking the walk are, of course, two different things. Mitch and I had started eating sensibly months before my trip. We felt great.

Then, in the name of cultural research, I chomped my way around the world with Anthony Bourdain abandon. (How’s he stay so trim?) Had to feed the beast that was the blog. Couldn’t let my “Good Eats” section go nekkid.

Wrapped myself up in winter comfort food like hot chocolate and more cheese in Australia.

Gelato and pasta-tasting in San Diego’s Little Italy.  Chocolate eclairs in the Paris in Vegas.

In LA, I went nuts on deli food I have to travel to Baltimore or Philly to get. Corned beef, matzo ball soup, black-and-white ice cream sodas. Yep.

The par-tay switch has been stuck in the on position even though I’ve been home for a while. Still feeding myself while feeding the blog.

What finally got me to put my fork down mid-air while breakfasting on blintzes yesterday was Carrie Fisher. Had no idea the outspoken author and actress was the latest Jenny Craig spokeswoman. (Unlike me, who’s been on the Daniel Craig diet.)

Even long-dethroned Princess Leia (Fisher had a great take on that in  Wishful Drinking. I highly recommend the book or the documentary), who’s struggled with drug addiction and has more issues than People magazine, has lost 50 pounds.

Along with Nora Ephron, she’s my hero in the clever department. But unlike demure weight-loss mavens Jennifer Hudson and Valerie Bertinelli (Kirstie Alley doesn’t count as an expert in my book), Fisher isn’t afraid to narrate the battle of the bulge as only she can. Said she was such a junk-food junkie, she’d devour a car if it had sweet-and-sour coating.

Says she lost a lot of chest. Said prior to changing her ways, she was toting an end table under her chin. I know the feeling of gaining it there. Though it thankfully hasn’t approached IKEA proportions, I’m tiny, so have to watch how much I gain everywhere.

So after going food shopping for the hurricane (right!) and mainlining my last supper of  you-don’t-want-to-know last night,  I power-walked this morning with Leslie Sansone. She’s that impossibly cheerful fellow baby boomer on The Exercise Channel who’s good at prodding couch potatoes like me.

(I normally go to the gym, but wanted to get my exercise in first thing without driving and then somehow ending up at Dunkin’ Donuts.)

Eating sensibly as I type this. Boring, yes. But it’s more than time. And this time, Princess Leia’s got my back.